After our fantastic time on the pacific coast we ate breakfast really fast and all of a sudden we had to put all our luggage on a local big bus which very suddenly was really packed. My mum got to sit down with Jed but me and The Ultimate Traveller had to stand up with bike chains sticking in my leg and people squashed into me. The bus was going to Leon and took an hour. From here we took a taxi to Managua airport which was an hour and a half away. This is the airport of Managua

and this is some of the inside of the building-.

We went to the check in but we had to wait at least 1 hour before we could check in. In that time we looked around the airport, had some cake,had some sandwiches from a stand… Once we had checked in we had to wait in a small departure lounge before we went on a small aeroplane that could fit 40 odd passengers.

It only took about 1 hour and a 1\4 to arrive at Big corn. These are the views we saw on the way there.

We saw weird fields that had circles on them…

This is also a view of… well I am not sure if it’s Little Corn or Big Corn but this is our first view of one of them.

This is Big Corn-.

I think this is the smallest airport I’ve been in-.

Before I tell you where we go and what we do I will tell a bit about these islands. The Corn Islands, along with the eastern half of present-day Nicaragua, was a British protectorate from 1655 until 1894, a period when the region was called the Mosquito Coast. At one time, the islands were frequented by Caribbean pirates. Some of these people were slaves from Africa. Now the islanders can talk a mixture of creole, (…..) misquito and spanish. A lot of the people have only been as far as Bluefields. We took a taxi to the main dock of Big Corn and took the ferry to Little Corn. It wasn’t really a ferry it looked more like a private yacht. The boat was called the Paradise.

It took about 1 hour. People were offered sick bags so I guessed it was going to be rough. My brother looked ill and as we got off he threw up on the dock into the sea! When we arrived at Little Corn dock (which is on the west side) loads of people started to ask us which hotel you were going,do you want to go to this hotel?… But the truth is we had no idea where we were staying. There was a man who told us that there was space at Dereks Place on the north-east (more east) side so that is where we ended up. The good thing on this island is that there are no cars or motorbikes. Every one transported things by wheel barrows so that’s how we transported our luggage. After a hot half hour trek through(the man pushed the wheel barrow) the jungle we finally arrived at Dereks Place and it turned out that there was only 1 night available. The place where we ended up staying was right on the beach . We got a fantastic room (more like a small house) for 80 dollars (our second one-off after punta allen!)! I know it’s expensive but it was a fantastic place (probably better than at Punta Allen) Here are some photographs-.

This is the living room,the kitchen,

and this is my bedroom.

You had to go up a wooden spiral staircase

and through a small window door

to the bedrooms. The windows were made of colourful bottles which made it beautiful. It also had a terrace with a hammock and a bench and around the corner of the door the terrace continued to a fabulous well made wooden bench with a lantern above.

Alan(the manager) gave us some pasta and veg to cook a meal for tonight . In the morning we went looking for a room all day (we walked nearly the whole island but you could walk the outside of the island in 2 hours easy)and we only found two rooms (they were ether too expensive or booked up) at El Suenos just further up from Dereks Place(which wasn’t that convenient) and one at Stedmans place on the east coast(in the guide-book it says that Stedmans cabins are the most basic cabins on the island). At the end of the day we had decided Stedmans would be best but it was a bit to late so he gave us an extra night. But the problem is that Stedman had only the first night available 2 nights away!? There is also this cheeky parrot here that does tricks and bites you. In the morning we decided to stay in town. We had to put all our luggage in the wheel barrow and then we left.

We found a hotel which wasn’t that good because I had to sleep on a thin mattress and a bag of my brothers cloths under my head. The restaurant was also very noisy because of the island generator was near and because of the dive shop generator. The next day we went to Stedmans place for 20 dollars per night( a complete opposite in style and price to Dereks!) so we stayed there for 2 weeks altogether. 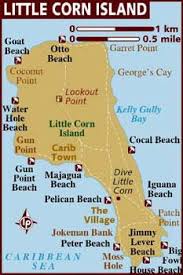 One thought on “Introduction to the Caribbean- Corn Islands”