One day I went to sleep-over at my friends(Zoe) house which was near a town called Jaibalito which was 2 towns from San Marcos and she has lived there for 1 year now. We took a boat there and it had its own dock,it was 3 stories high and it was yellow. It also had a trampoline outside. I’ve been to her house twice. We play on the trampoline(I love trampolines) jump into the lake(that’s fun) and once Zoe and her older cousin built a cool bamboo raft and the first time I went we played a lot on it(it was good except we got lots of scratches the day after). We made pop corn for lunch and built a sort of fort,the first sleep over we built a fort down stairs in this long corridor which was really comfortable and played uno,saw my first small scorpion and had breakfast inside the fort. The second sleep over we built a fort on the second story (although the second storey is the first storey you walk into when you come into the house) and this is a picture of it-.

I did a mandala class which I didn’t like that much. We did a mandala with our bodies and we coloured mandalas,made mandalas with our lunch and thats basically it. It wasn’t that much. Some smaller children might of liked it but not me.

I did a poi class which contrary to the mandala class was quite good. Do you know what poi is? Well if you don’t I will tell you. Poi is maori word for a ball on a cord. Poi are used in a form of object manipulation commonly referred to as spinning,twirling,dancing and juggling. This manipulationis a performance based art that often involves fire or glow poi althought we didn’t use any of them because of course it was too dangerous. First we made them. How we made them: First we took a couple of handfuls of rice in a plastic bag and tied it up,we did two of them and tried to make them even. After we had done that,we took a piece of cloth and wrapped it around the plastic bag and painted them(we did two of them) and left them to dry. When they had dried out we attached a cord to them and the teacher showed us some tricks at the end. She showed us some pretty good tricks and I can still do it!

I also did a gardening class(all these classes are at Laborotorio De Suenos). First we dug up some soil from outside(oh and I took tuc-tucs by myself to all these activities) and sieved it so all the rocks would come out and put the soil in a big egg carton and we also put soil in a wine box(that was to take home) and we could plant whatever we liked(from what they had) and I chose broccoli and lavender. At the end we watered them and left the egg carton at Laborotorio and took the wine box home. In a few days my broccoli had grown a lot but the lavender didn’t come out. This is how big my broccoli was before I left it-

I did an arts class and this one was the last class I did with Zoe. We had to choose 2 things we wanted to draw and I chose the sun and a flower. We drew the things we chose and glue it on a massive piece of solid cardboard and everyone put their drawings on and this is what it turned out like-. 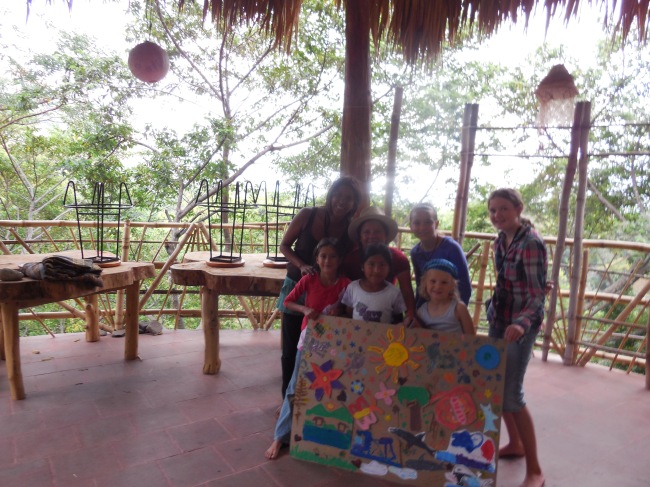 The last activity I did was a dream catcher session. This was really good and these are my reasons why,it was really fun,it’s a good skill to have,she was quite a good teacher and it was free! The sticks for the outside of the dream catcher were already made but then we had to chose our colour of cotton to do the web and I chose red.yellow and white. It is quite hard to explain how to do it by writing it so I think if you want to know how to make one you need to look this website up http://www.kidsworld.com . At the end of the class we all put a feather in the middle and beads and feathers on the outside and this is what mine turned out like-.

While we’ve been in Marcos for a month I’ve been taking guitar lessons with a man called Ed. I took quite a lot of private lessons during the week usually from 10 am to 11 am,for 1 hour. I also took a group lesson on saturday for 1 hour with Zoe and a boy called Lucas. I quite liked my guitar teacher,I learnt quite a bit. I learnt that the guitar is a bit like a labyrinthe and he showed me some good types of picking. Group days we usually did a song that he invented which was called Pirate Song and everything was good about it,the sound,the timing and it even felt good playing it. On the last day with him we both invented a song and I arranged the pirate song.

Our next door neighbour took me to(apparently) a hula hoop session at a hotel called La Paz which has very nice gardens and a very spacious circle floor at the back of the gardens and that’s where we walked to. When we arrived here,it wasn’t really a hula hoop session it was more of a cacao,dance ceremony which was okay but I would of liked to do more hula hoop(I love the hula hoop). Anyway we drank cacao(which I very much disliked) and we sort of prayed to life whilst holding a stone from the holly tree of Guatemala and myrhh. After that we just danced. I went back with our neighbour on Tuesday and I brought Zoe with me and it was much better because I learnt lots of tricks although some were complicated I remember some.