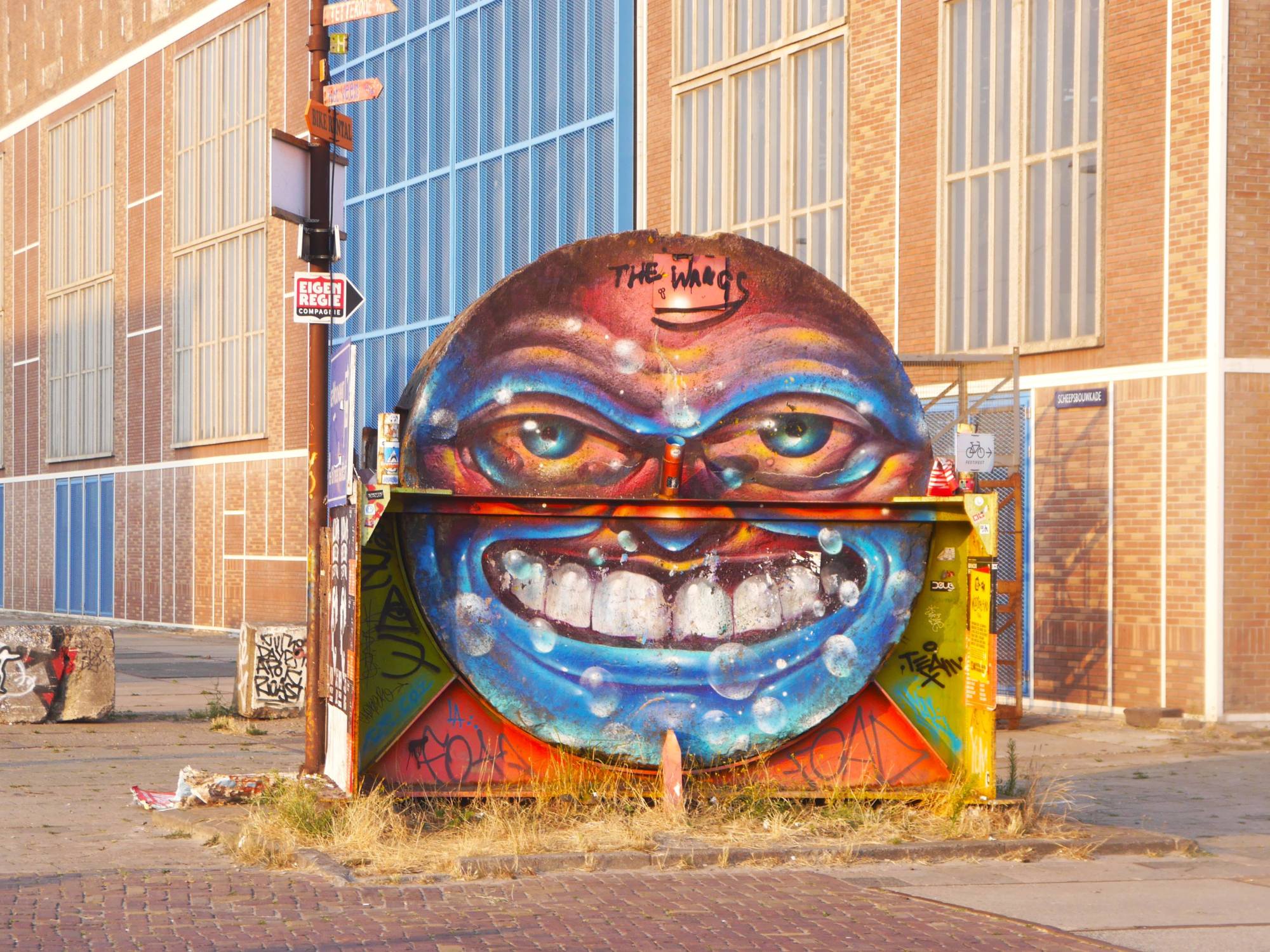 Arriving on the outskirts of Amsterdam at midday -onto Amsterdam citi camp- we decided to go into the city and make the most of it. The ‘citi camp’ is as close to the heart of Amsterdam as a campsite of sorts could get, being on the other side of the river, situated in NDSM. NDSM has been transformed from an industrial shipyard into a cultural hotspot and seems like the perfect place for a creative vibrant social space, without judgement. At first it appears to simply be nothing more than an abandoned shipyard covered in wall murals of graffiti but you soon saw that it was much more as the neighbourhood widened and bloomed with cafes, restaurants, stages and the busy footsteps of artistic people. 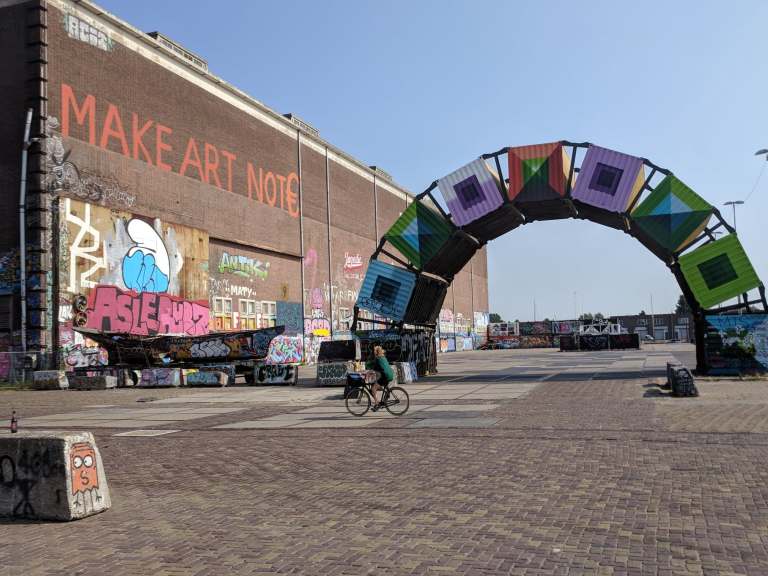 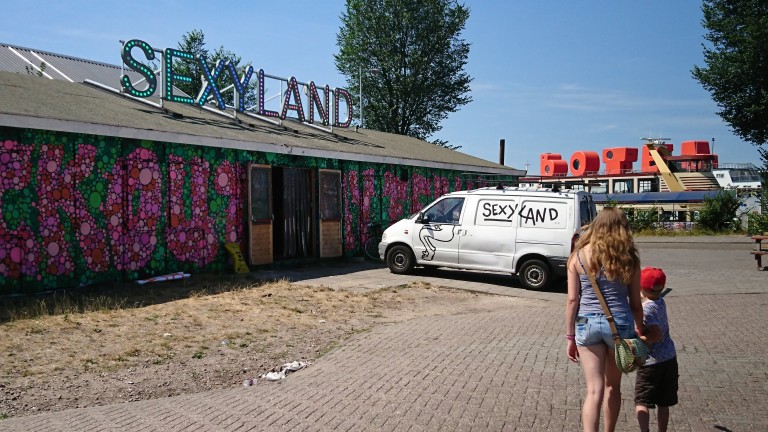 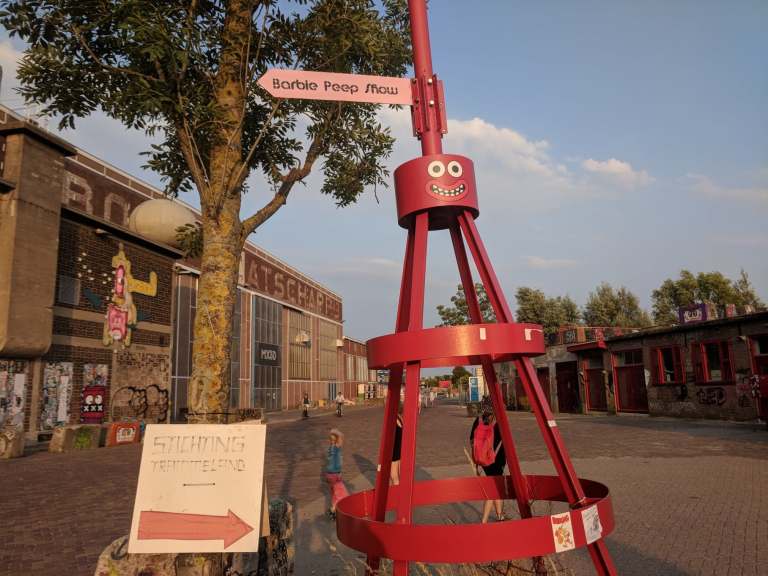 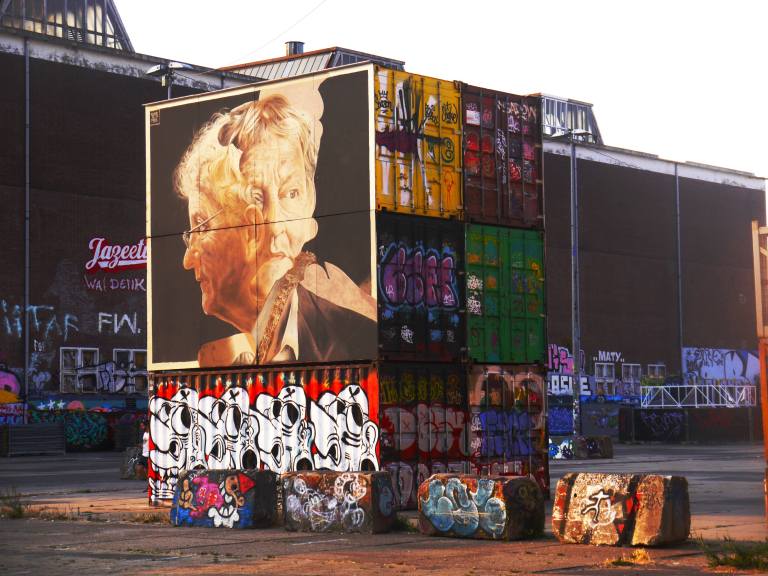 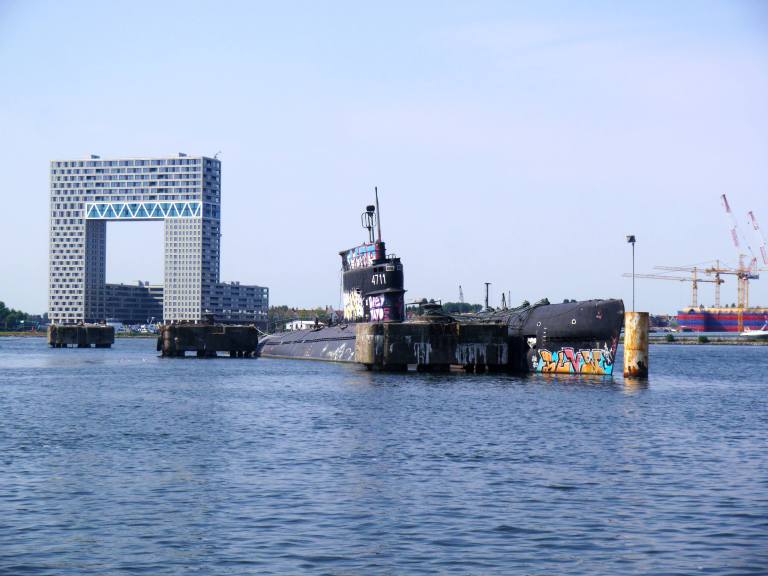 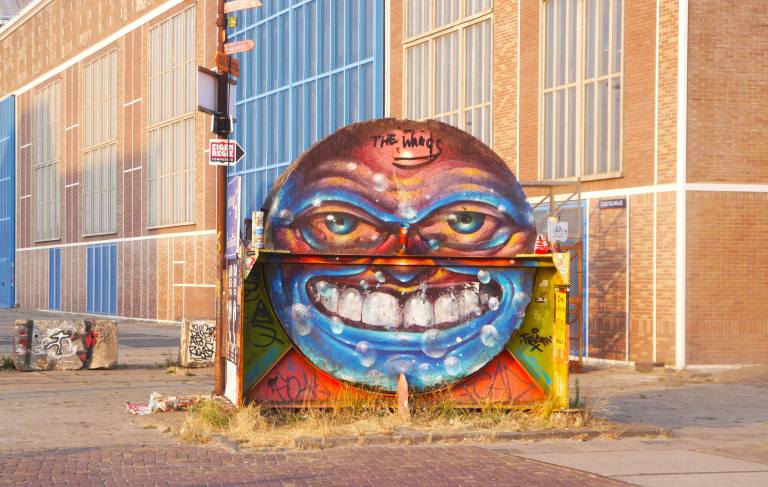 The ferry from NDSM into Amsterdam was supposedly to take us right into the heart of the city centre with only a small walk to cover the rest of the distance but of course we were off a stop too early and instead of waiting for the next ferry we continued the rest of the way -20/30 min walk- into the city. However irritating it seemed at the time it turned out to be a great mishap as we were able to enter the centre by the canals and peer into the thousands of house boats all with their washing dripping into the small depths of the canal; some even had wood stacked alongside the boats side along with a ‘floating’ playground. 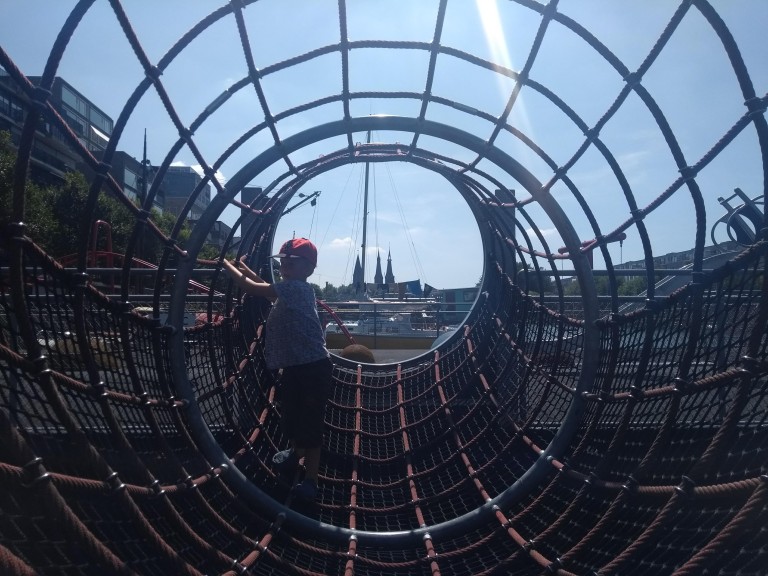 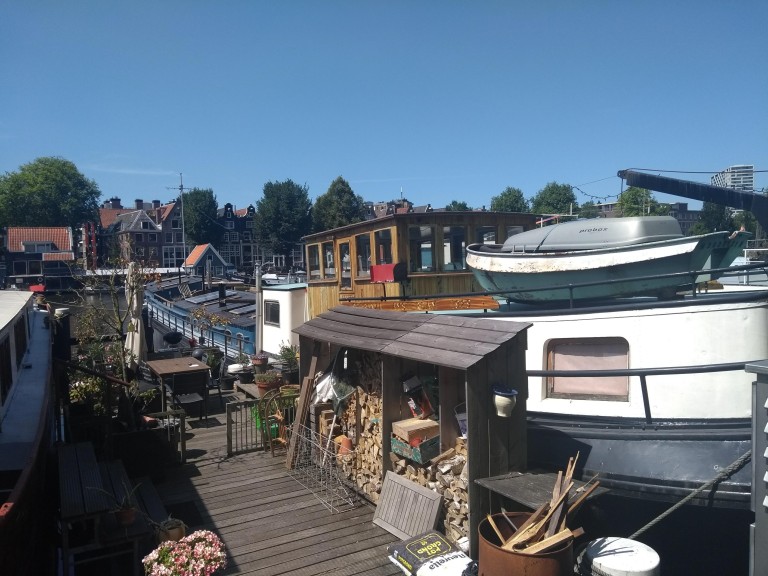 Since we were visiting the city tomorrow as well I decided to take the opportunity to drag my family half an hour through Amsterdam to a location setting from the film Fault In Our Stars. The scene in the film was set on a bench on the canal and was just one of those places that people liked to say they’d been to therefore was more popular than I expected. 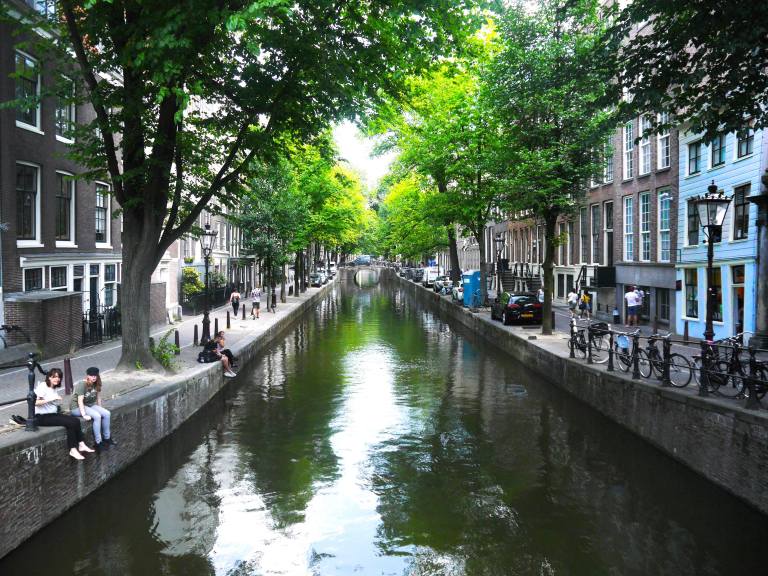 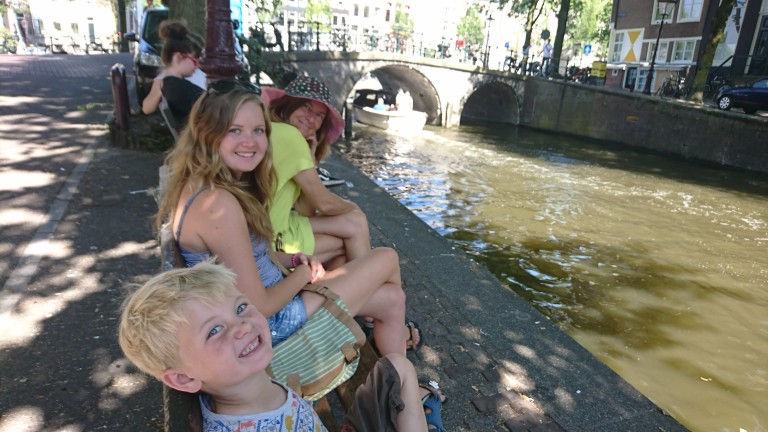 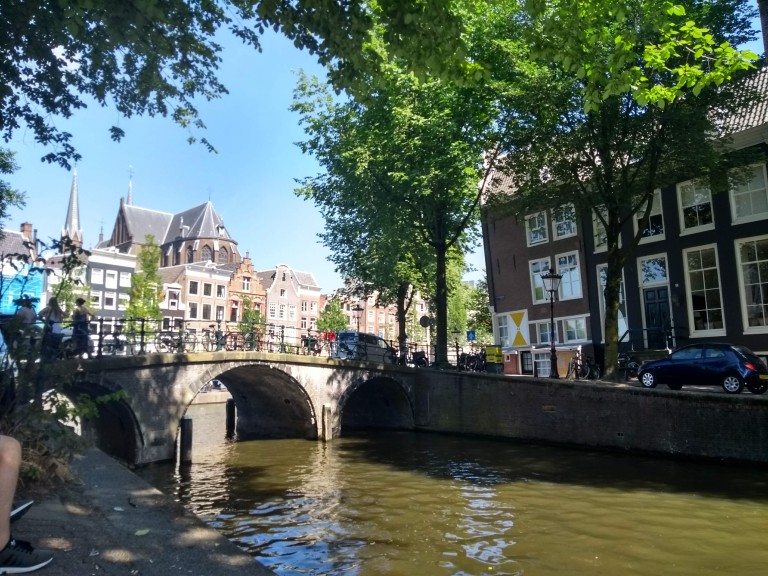 It was a beautiful day and the sun shone off windows and canal waters as if trying to let us into a secret.

Once back in the NDSM quarter we sat alongside the river with a beer in hand watching the sun set, setting alight everything in its path before it did. My brother found a sprinkler and a friend in the gardens and his family were at the end of a similar one year tour of Europe as we were just beginning. It was good to swap tales and advice. 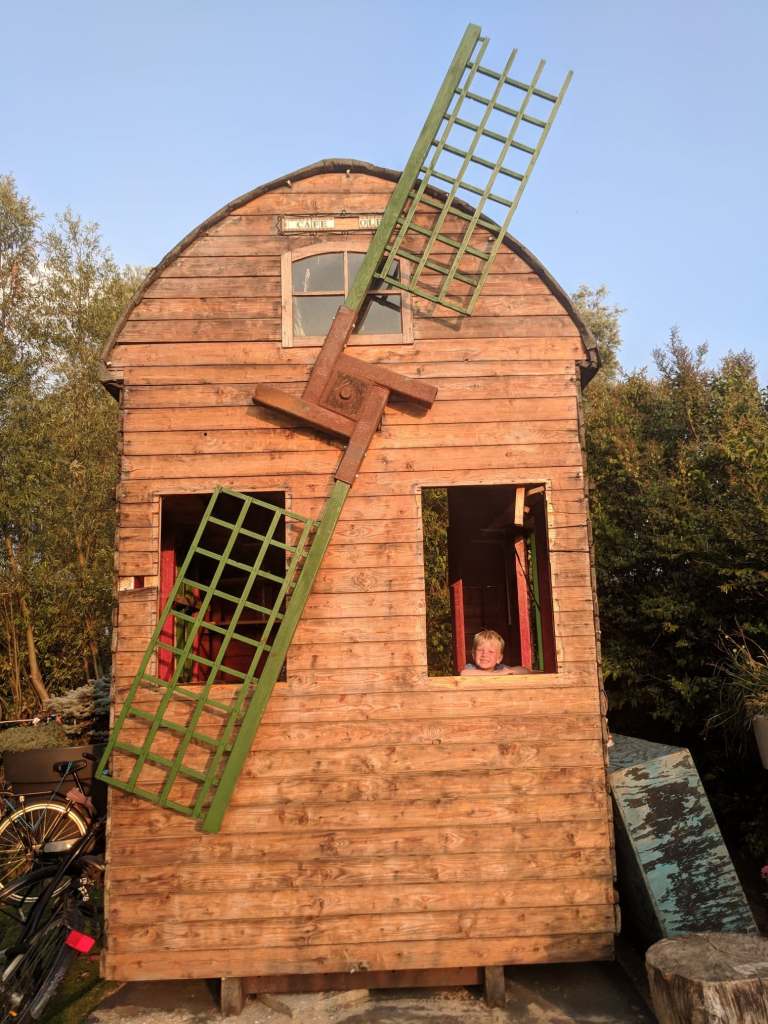 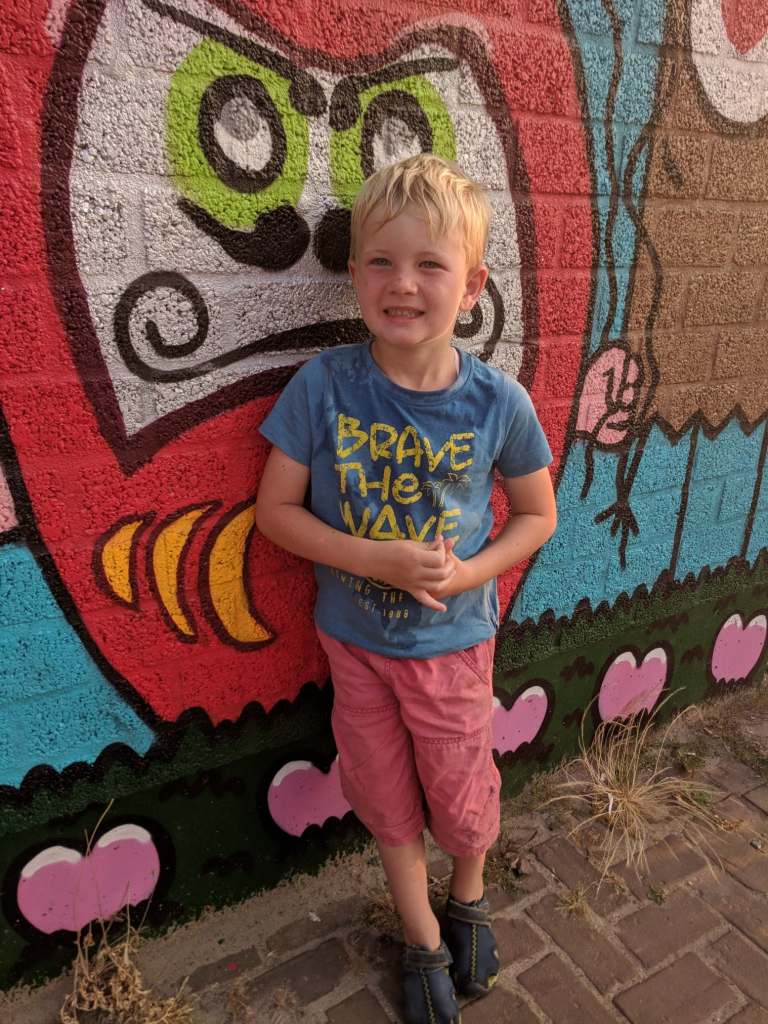 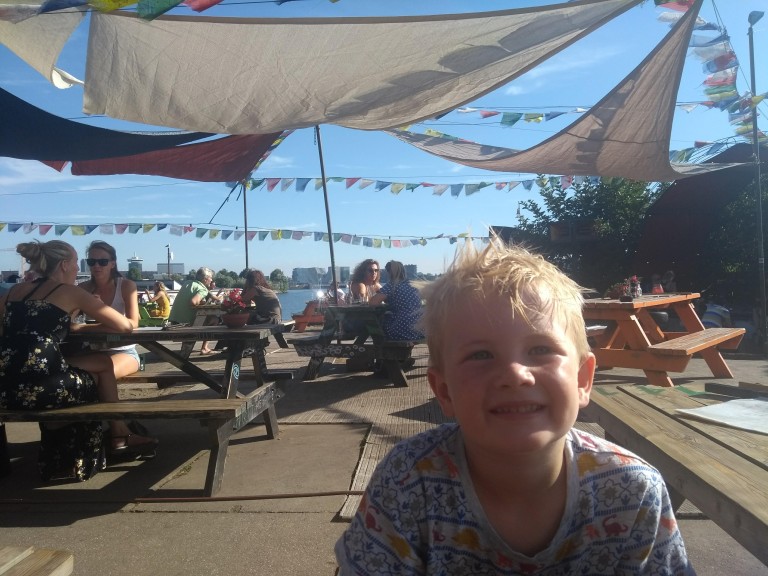 The next morning we headed once again into Amsterdam, this time with a full day ahead of us. Once on the other side of the IJ river (this time getting off at the right stop) 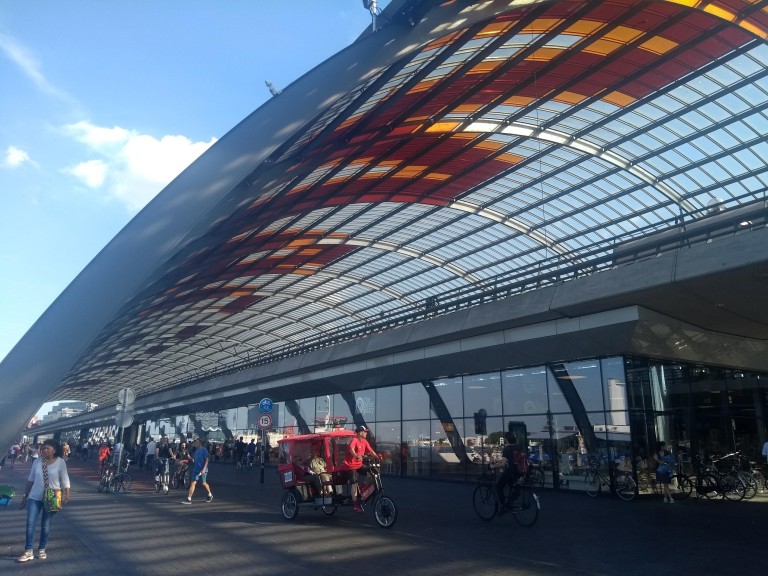 we weaved around the billions of stacked up bicycles 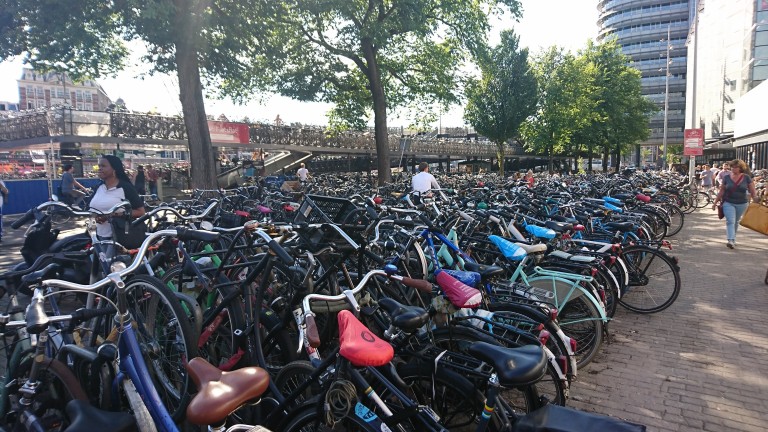 and onto Dam Square. Trams travelled through the cobbled streets and square as tourists wandered around aimlessly, oblivious to the oncoming traffic. From the main square it was easy to find the Red light district with it’s sex shops, prostitutes and small alleys. From here we drifted through hundreds of lookalike streets, canals and houses, slowly making our way to the Museum Quarter. 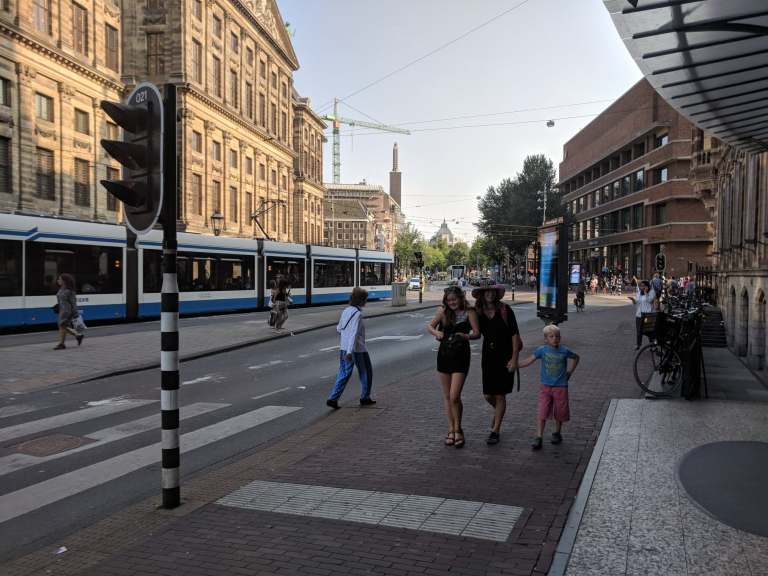 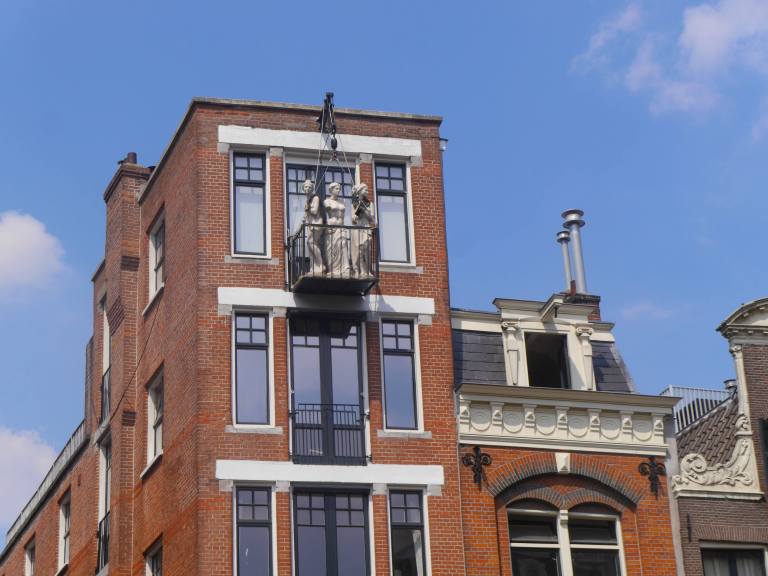 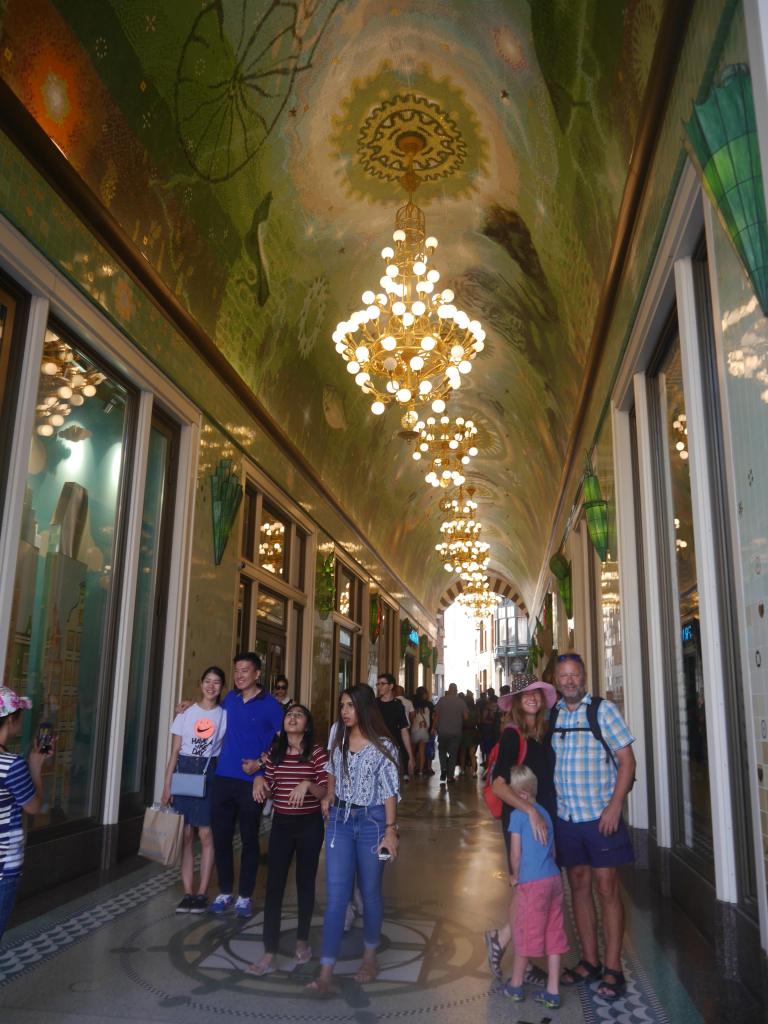 Our stroll, was like one you might expect in a city like this one, peaceful. It was exactly that until a van zoomed through the narrow cobbled street which we were walking on and banged its wing mirror straight into TUT’s (The Ultimate Traveller-Ian) shoulder and out came a short apologetic man talking fast Dutch. It could have been worse although it shook us up(but later led to laughter).

Once at the Museum Quarter (after having been through cheese shops, the Banksy museum and other points of interest) we were relieved to find a pond amongst all the museums where people bathed their feet under the gaze of a 13 metre tall ‘Self Portrait of a Dreamer’. 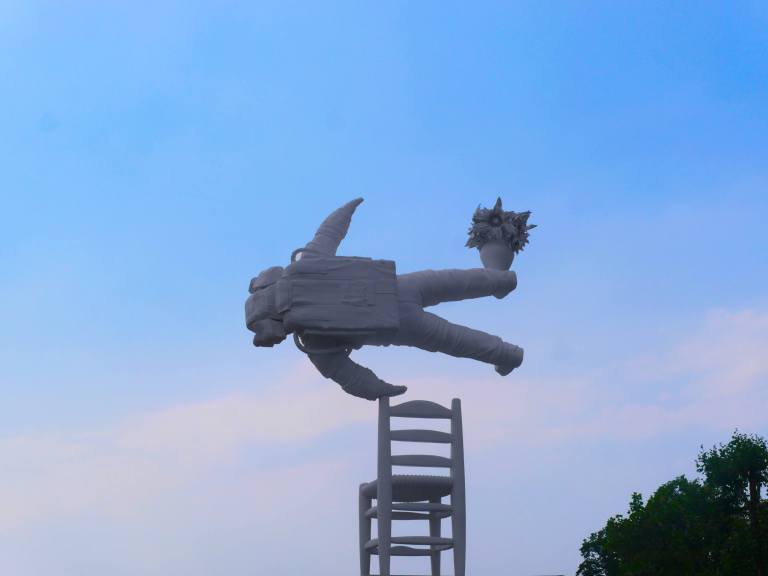 The perfect place for a picnic and Jed for a swim before heading off to explore the Van Gogh museum which holds a spectacular collection (the largest Van Gogh collection in the world). 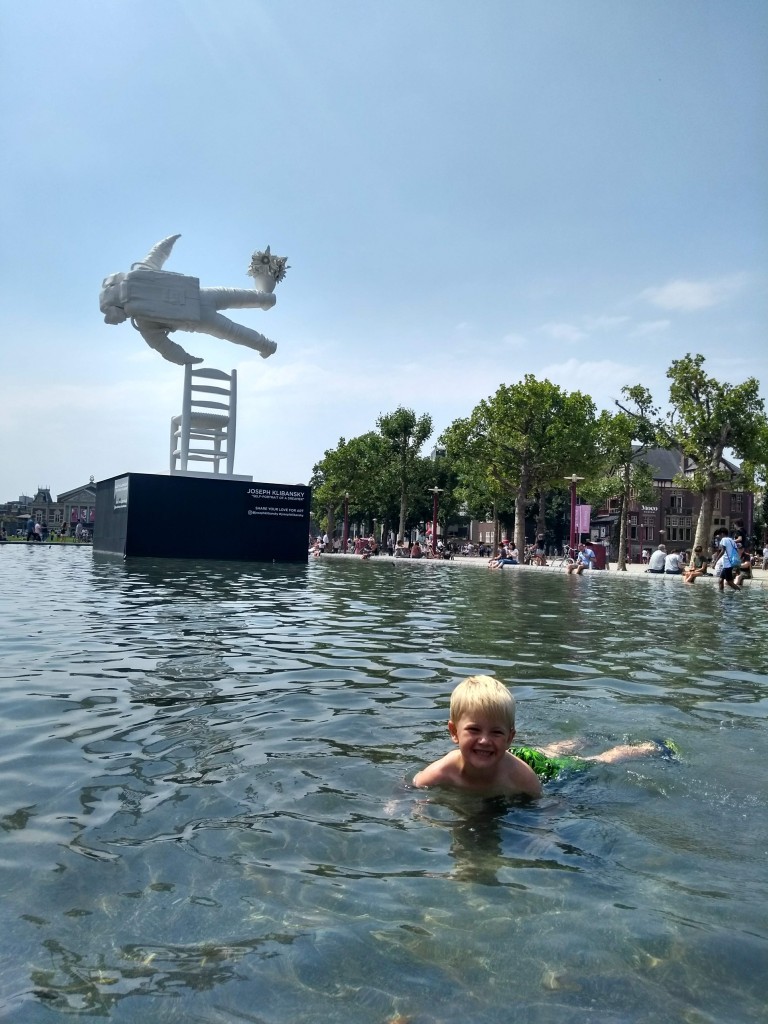 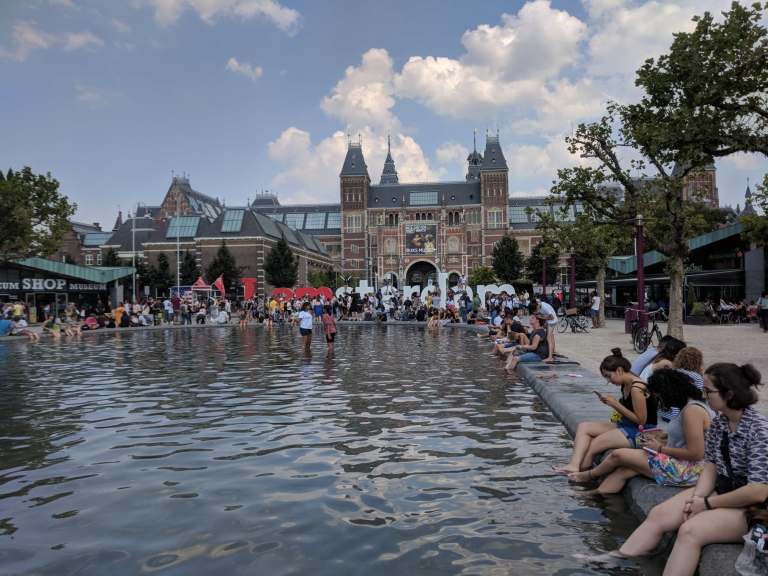 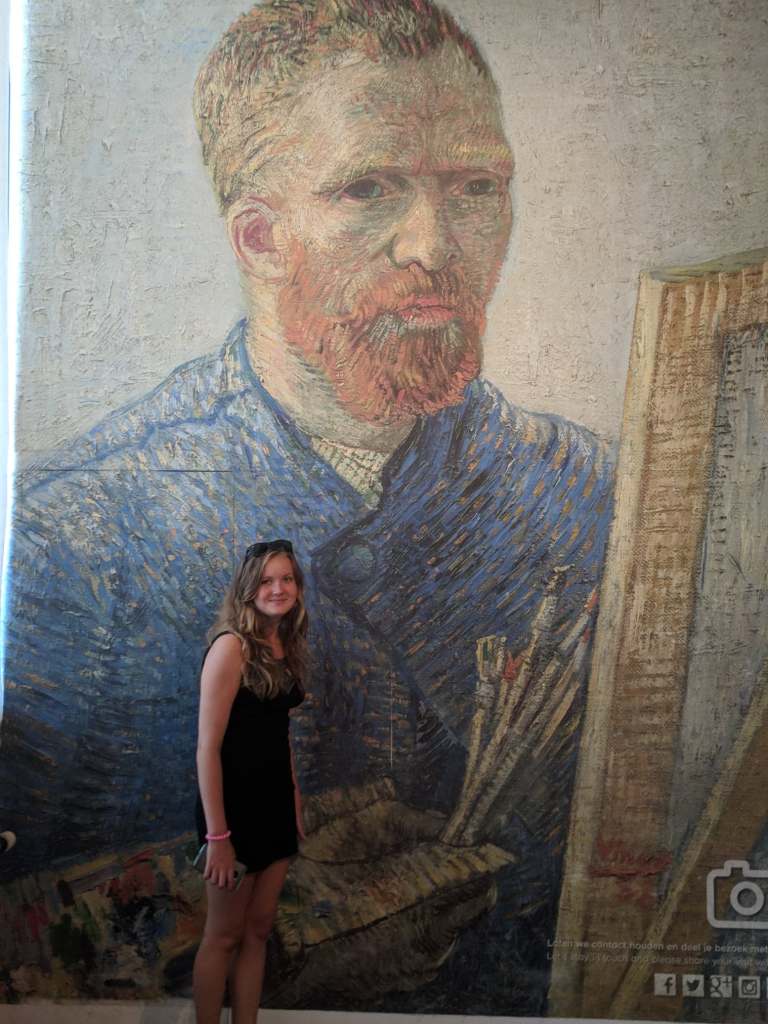 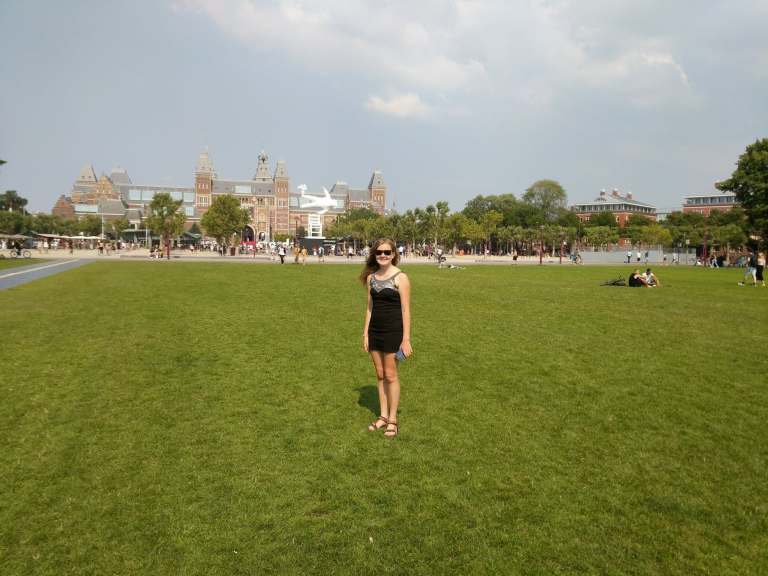 All in all this city is full of life and grand architecture with a vibrant artistic culture and one of my favourite cities (go visit if you haven’t already!).