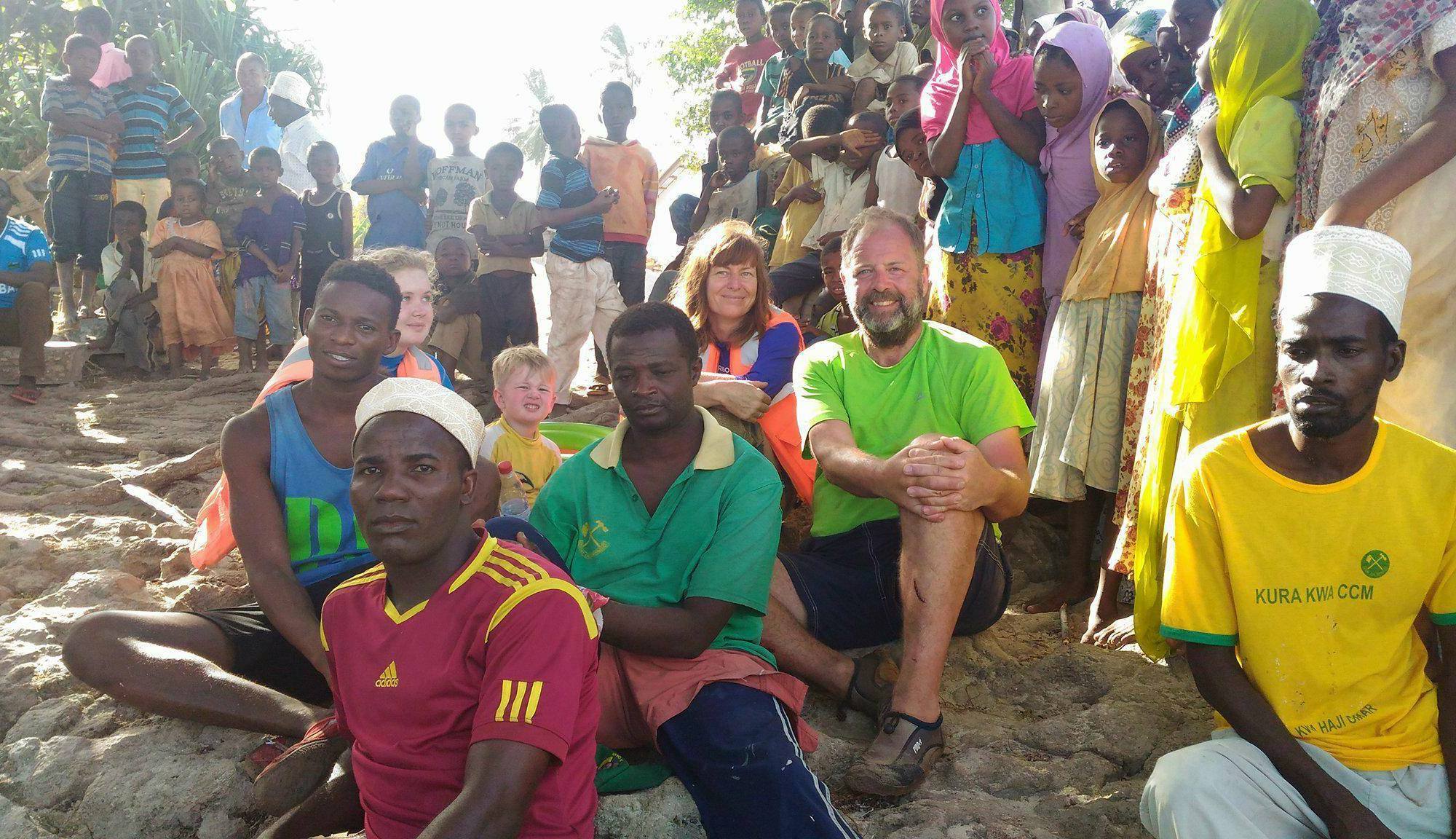 We began marching around the cove through the thick,  seaweed infested water which came crashing to the rocks on our right. We turned another little headland expecting to see yet another stretch of rocky coast but found a sandbank instead which stretched from our side of the island accross the sea to the main island. But it was quickly being invaded by the incoming tide – which was desperate to cover the sand. So the two men hurried us along. When he realised Jed was too heavy for us to carry any further at a fast pace he took over,  so I ended up carrying his pineapple (of which was the only thing he rescued from the boat) and mum carried his ruined phone. All our bags were seemingly lost in the waves including phones and cameras and clothes. From then till we reached the main Tumbatu island it was a race against the tide which we almost lost.

Without the man with the spear there was no way we would have got across the island as there were so many trails to choose from. I only expected a short walk of half an hour or so to reach the village but it ended up being over an hour (although it felt like 5). With no shade, thin beach shoes, no water and no food (apart from my pineapple) we dragged our feet across the thin, rocky, sandy paths under the full blast of the afternoon sun.

We saw no life apart from a dead monkey with its feet in the air. Me, myself and my pineapple trudged behind everyone else watching mum struggle to hold Jed and keep the life jacket over his head for shade (as we had no suncream and no hats, all lost to the sea). When we finally saw and walked towards the sea whilst hearing the waves it was like music to my ears. We continued tripping along to the coast and then carried on our walk through sea once more.

After what seemed eternity (especially when all I wanted to do was flop in the sea along with the seaweed) we finally splashed around a corner which led onto a huge sandy beach with villagers at the other end.  They let us rest under an over hanging rock for a few minutes although all I really wanted to do was ask someone for food and water like a ravenous toddler. We finally set off once more through the jumping sand flies and  the crunchy dying seaweed. I was glad when we were among the high trees of the jungle which provided some shade. Not much further and we found ourselves in a huge space of empty dry fields which were used as four football pitches with the sea on the left and the jungle on the right, I couldn’t think of a better place to play the sport although obviously not at the moment!

Shortly after was a dry mud patch and we found ourselves walking behind two local women. They turned around, saw mine and mum’s legs and quickly came over and each took a sarong off their head and wrapped us up. I was amused but I also found myself being thankful when I found myself walking through the built up, squashed village of basic, concrete houses and overly curious locals.

The Zanzibar islands are strict Muslim and obviously we weren’t appropriately attired for this occasion!

The man with the spear took us to his house which felt like it was in the very centre of the village. Not long after it seemed every man, women and child were surrounding us on either side of the narrow alley we stood in. If I smiled at the women they would giggle and chat with their friends. The children would hide and the men would smile curiously and stare along with the rest. Once our guy explained what had happened (I think he was anyway as there were many oos and ahs and looks of astonished understanding) he asked the local man if we could have some water. This is when TUT took around five local coins out of his shorts pocket and laughed as he handed it to him. (The first time that he never had money on him and our most desperate situation) The villagers laughed too, as it wouldn’t even buy us one bottle of water. When we each got one it felt like I was drinking heaven itself.

We then made our way to the village chiefs house (with the villagers following us I felt like the Pied Piper) which was the same as the others except for a few white markings above the doorway. The chief welcomed us (he is the first person I’d seen wearing glasses in Africa) into his office and offered us a seat. As our English speaking guy recounted our story I took in my surroundings; it was the same size as all the others, with a desk stacked with papers and three doorways in the back with sarongs serving as doors. Once the chief knew our story he was very kind to us and bought Jed come biscuits and showed us the way to the dock where we then waited for a boat he had arranged to take us back to the mainland of Zanzibar.

The villagers still followed us and when we settled down by the water, the children crowded around us in a circle and slowly crept forward (only dispersing when a man came and shooed them away by batting a cloth on the ground). As TUT sat down and explained the story so the chief could write it down, the children sniggered behind his back and pointed at his builders bum. The chief took photos of us among the villagers on his unsmart phone and we did eventually receive the images a few months later which amazed us all but for which we are very grateful (otherwise it seems just a dream).

When the boat finally came we clambered in after thanking everyone (especially the fisherman with the spear) and settled on the boats floor as we waved at the villagers we would most certainly never see again. I understood why they didn’t want tourists. It’s clear they wanted to keep their Muslim community away from prying eyes and would rather stay poor than have big resorts surround them. I would maybe want the same, but they were so kind to us and we will never forget their help and maybe we can repay them in some way one day. Thank you to the lovely people of Tumbatu for such a warm and humbling welcome.

Once we reached the main land (where they swapped the sarongs for towels from a hotel) we asked to go to the police station for insurance purposes. The ‘police station’ was a hole in the wall with way too many angry,  sweaty ‘policemen’. They ordered us to fill in some random ‘forms’ which were basically pieces of blank paper if not they were in Swahili. Ian struggled as he didn’t have his glasses and they looked mad when they saw his squiggly fat letters. The man dealing with me looked like a cartoon character with smoke coming out of his ears, a gap in his teeth and really impatient. He shouted at me asking if I could write, after that point I ignored everything he said (which annoyed him more) and just guessed what the Swahili writing was asking me.

After that they MADE us  go to the hospital (going as far as putting a policeman in our car to escort us). The hospital was a normal building but inside there was no water and the fans didn’t work. Once mum and Jed were in a room (the doctor being very confused as to why they were there) a young boy was carried in with a massive gash on top of his head so understandably  me and TUT refused to see the doctor and let them go first (they were actually waving us in before the boy?!). After they let us out we ended up going to another police station which was more modern and me and Ian amazingly got our bags back! Mum’s stuff was all lost though and Ian’s GoPro camera had gone (a fisherman had found them). At about 10pm we were finally sitting in our room and staring into space after eating some delicious fruit provided by the guesthouse who seemed in major shock by it all. A crazy crazy day I would say but one we won’t forget in a hurry. Thanks for reading 🙂