We took the JJ express (Joyous Journey) bus to Bagan from Yangon former capital of Myanmar/Burma. We had been on the bus for 8 hours when it dropped us off at 4 am in a deserted carpark in the middle of nowhere. As soon as we stepped from the vehicle we were swarmed by taxi drivers pestering. We had read about this on a few other blog posts and websites, the bus drops you off in the middle of nowhere at a terrible time of night so you have no choice but to pay the asking price of the taxi drivers.

It was a 20 minute drive or so to our hotel which was in ‘New Bagan’. Old Bagan was supposedly near most of the temples but as we drove in there seemed to be temples everywhere. There was a gate when entering New Bagan and that’s where they made us buy the tickets. Its 10 dollars per person for a 5 day ticket but no one will check your ticket at any sites.

This hotel is on the posher side of what we’ve been staying in with a swimming pool, restaurant and gardens surrounding the room. We stayed in Bagan for 10 days so we could really explore everything.

The Bagan temple falls into one of two categories: the stupa-style solid temples and the gu-style hollow temples.

Between the 11th and 13th centuries, over 10,000 Buddhist temples, pagodas and monasteries were constructed in the Bagan plains, of which 2200 temples and pagodas still survive to the present day. 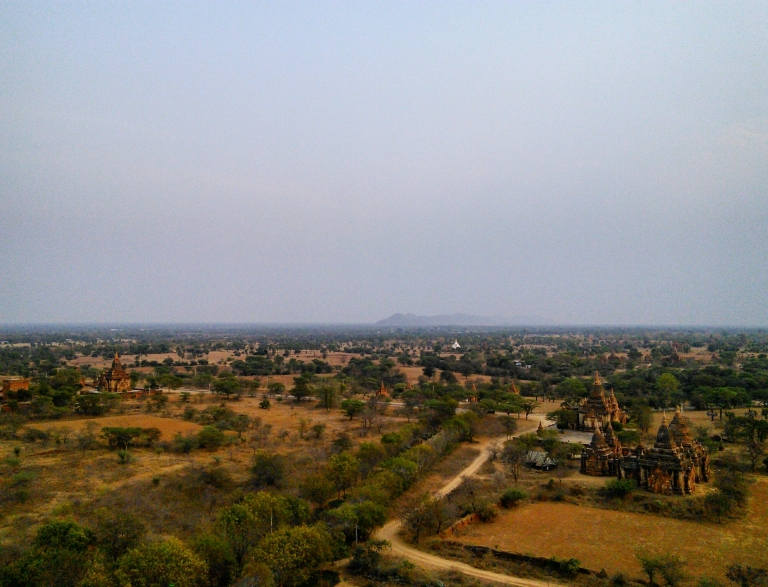 So no they aren’t as old as a lot of the temples we have visited over the years such as the Mayan temples in central America or the pyramids and other temples in Egypt or even Angkor in Cambodia on this trip. But these have still got to be appreciated as people appreciate the more famous ones over the world. The best thing is that outside of the main temple area in Old Bagan’ there are basically no tourists! So you have the entire place to yourself and that doesn’t happen too often anymore does it! 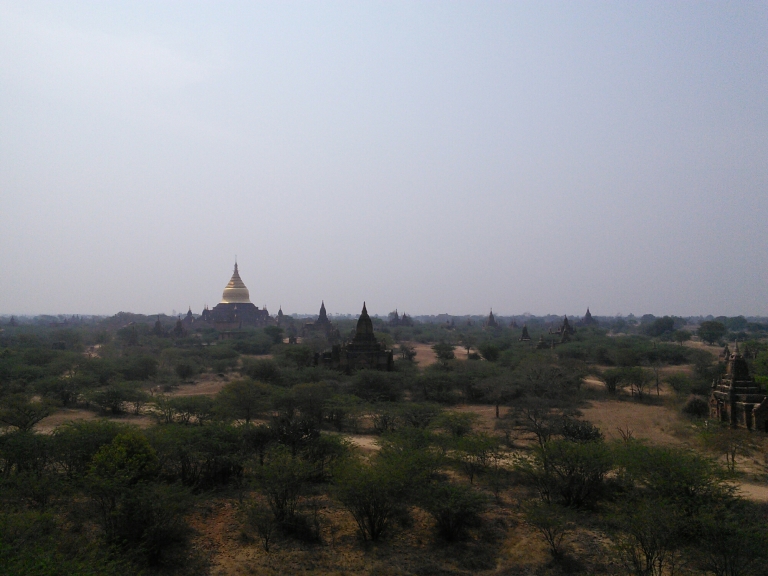 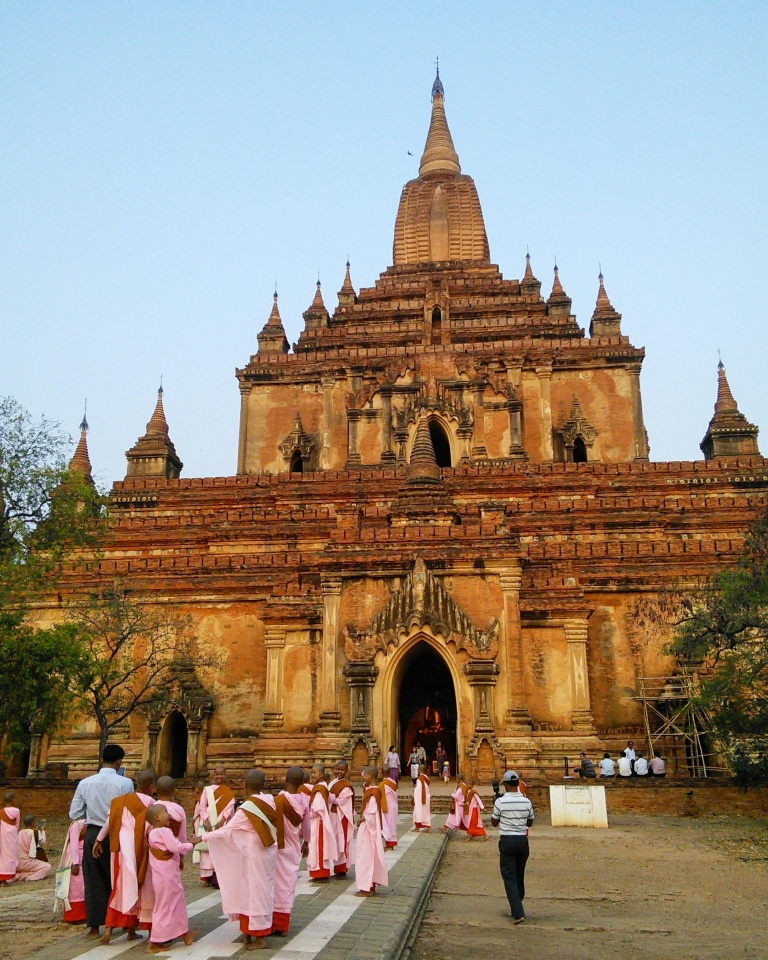 The site is huge and on almost every part of land there is a temple, big or small showing off its features. They aren’t as detailed as some other sites we have visited but it’s not so much what they look like individually but as one, as a group, as a site. That’s when it’s impressive although some of the larger temples are amazing. 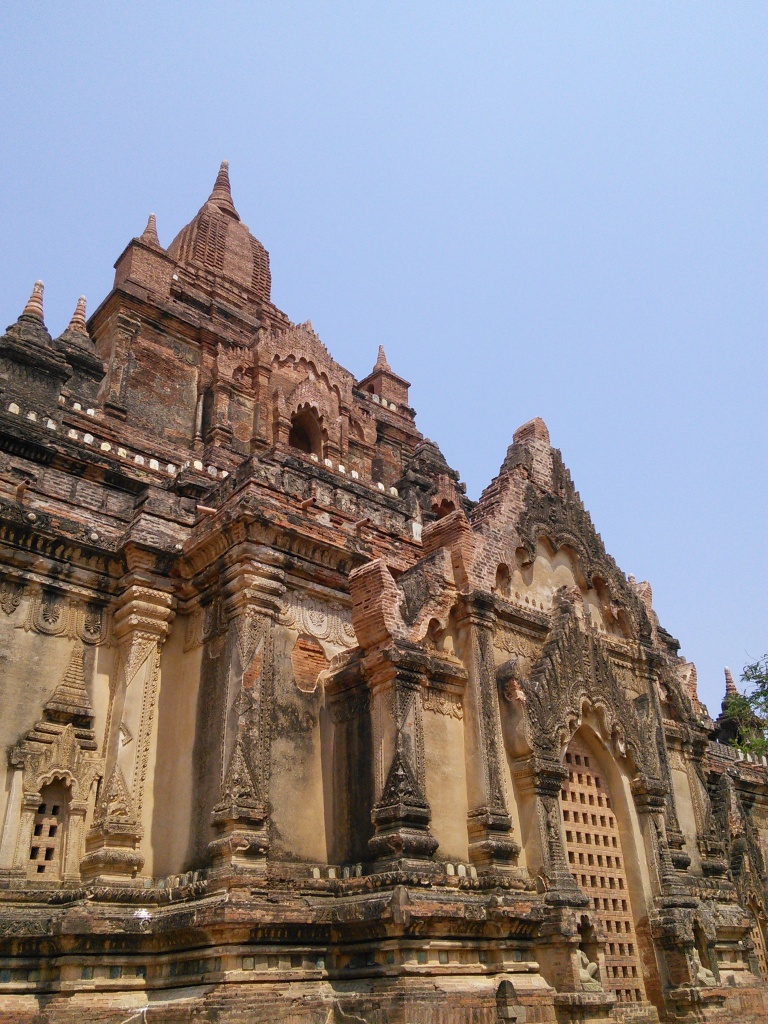 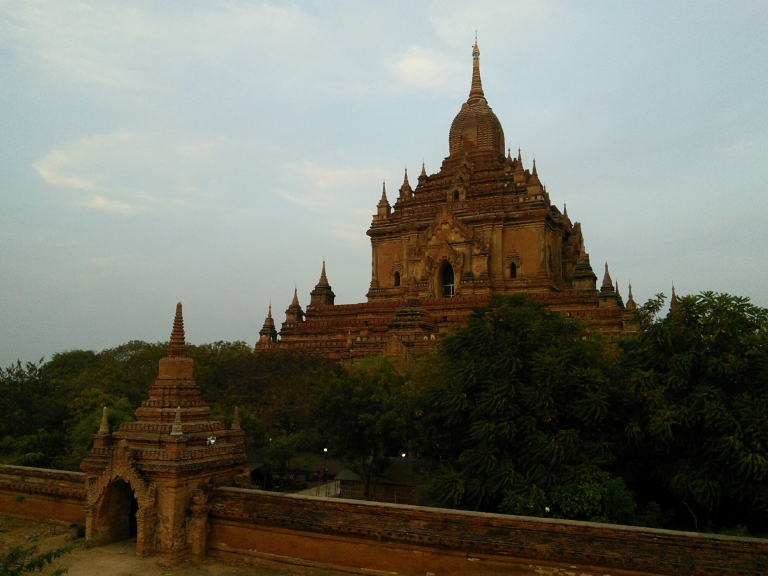 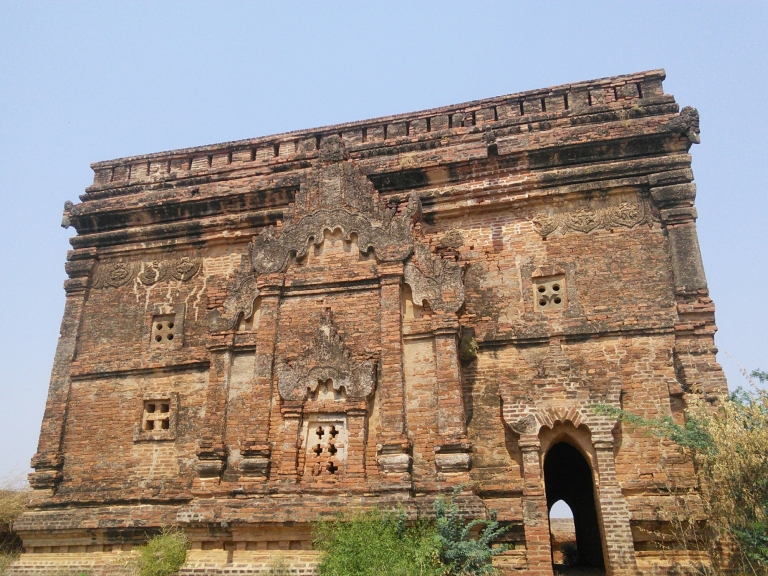 They don’t provide scooters with engines for tourists around here only electric scooters. So we rented two of those for 4 days to explore the site on our own. They are smaller than normal scooters and easier to control so it was a slight hassle for me and TUT (The Ultimate Traveller) to fit on one but we managed.

Everywhere on the site it makes it clear not to throw rubbish and take care of the site as it a UNESCO site but as you drive around the lesser known areas you notice just how polluted it is. Piles of rubbish in the desert countryside fill the paths, some have just been set alight and smoke rises into the air to mix in with the dust.

Apart from that issue, it was beautiful. Every temple was different. Each had it’s own unique qualities. Most were hardly ever visited if you went off the beaten track but some were crawling with tourists. The abandoned ones were full of bat droppings but since they were still Buddhist temples we had to take our shoes off even if no one was around as it is disrespectful. So yeah they could do with cleaning them up but still fantastic temples. 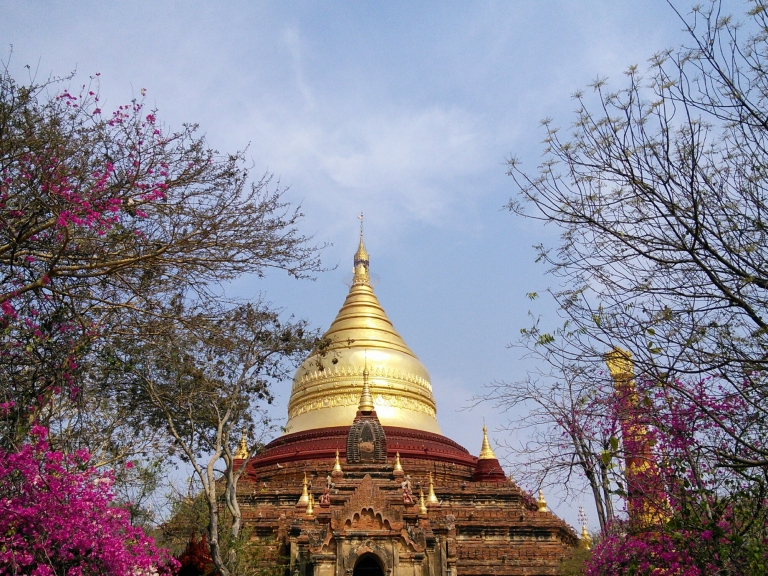 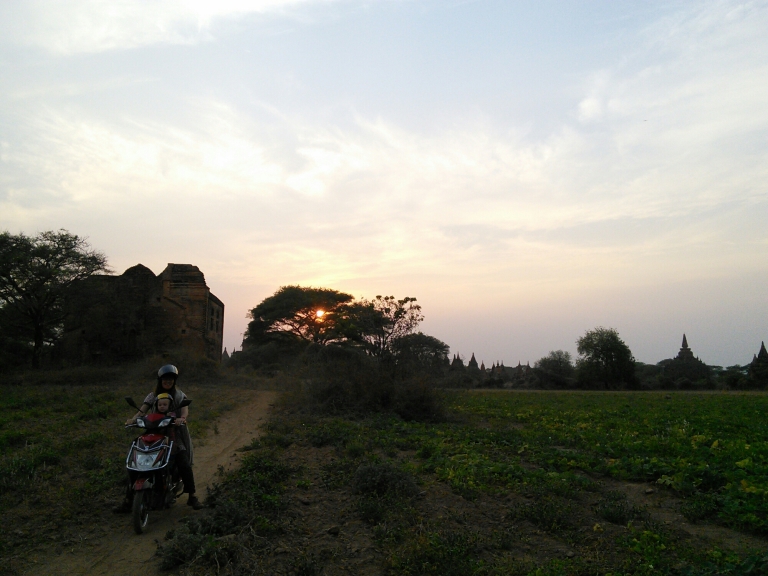 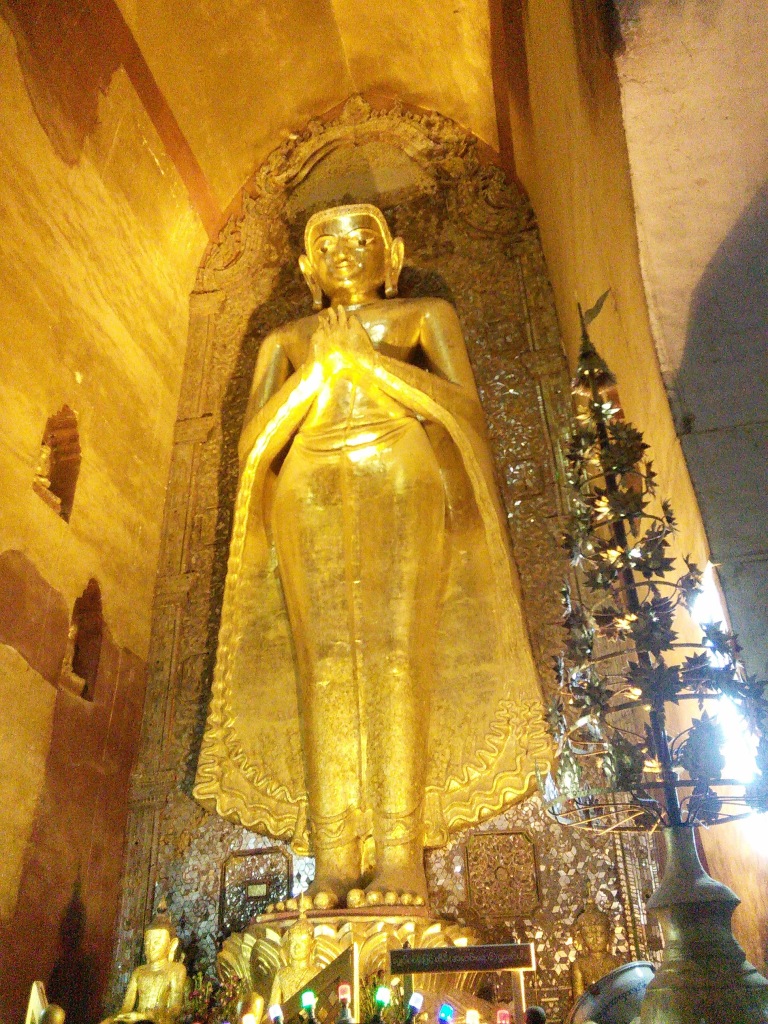 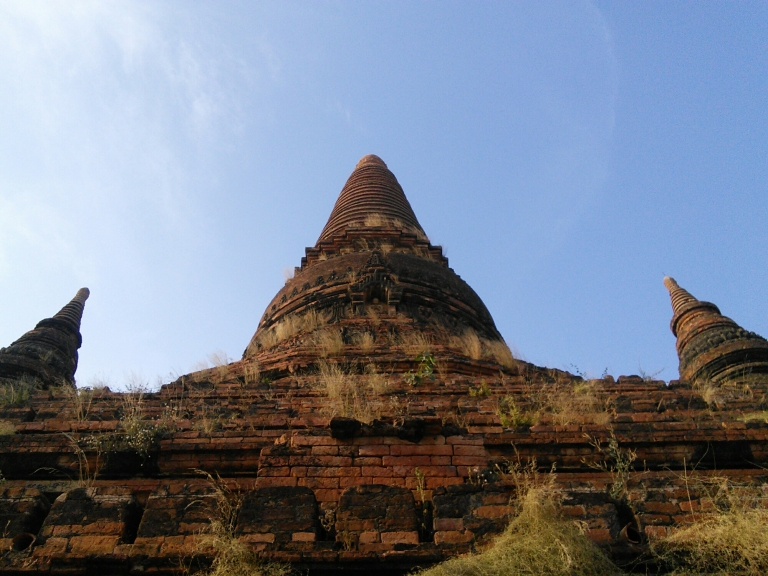 You can go inside most and a lot of them you can go upstairs on the inside to reach the upper levels of the outside through hidden staircases that Jed had great pleasure in finding. We saw most sunsets from these great vantage points, the plains and temples turning a burning orange as the ball of flame glided towards the mountains on the horizon. 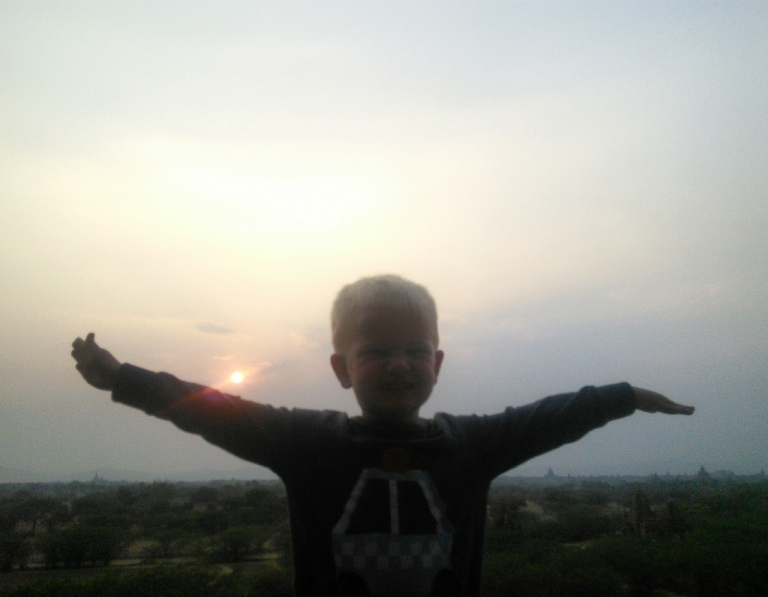 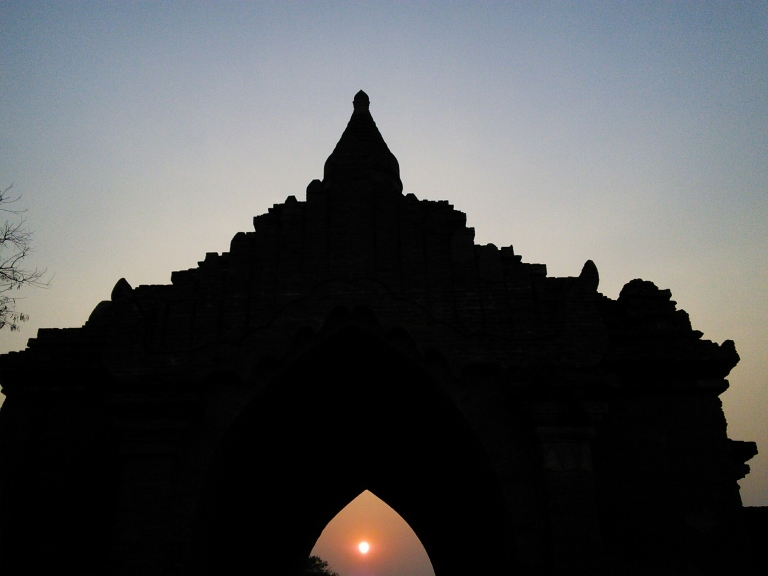 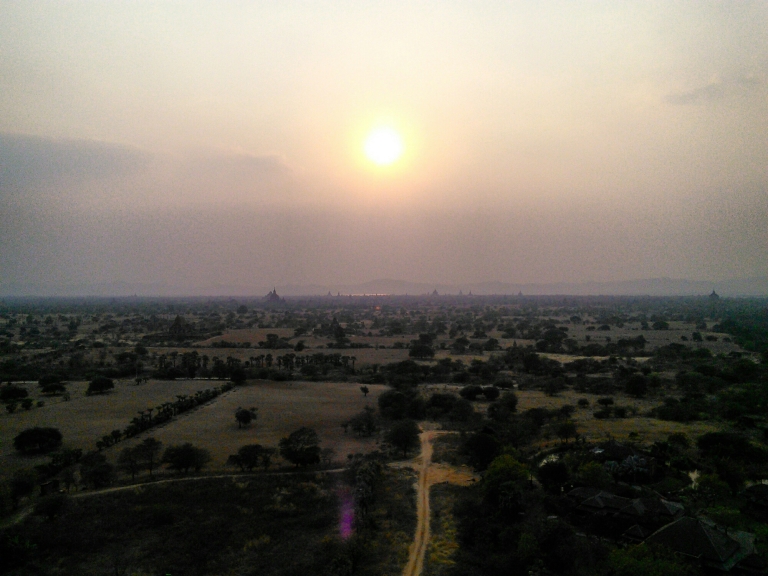 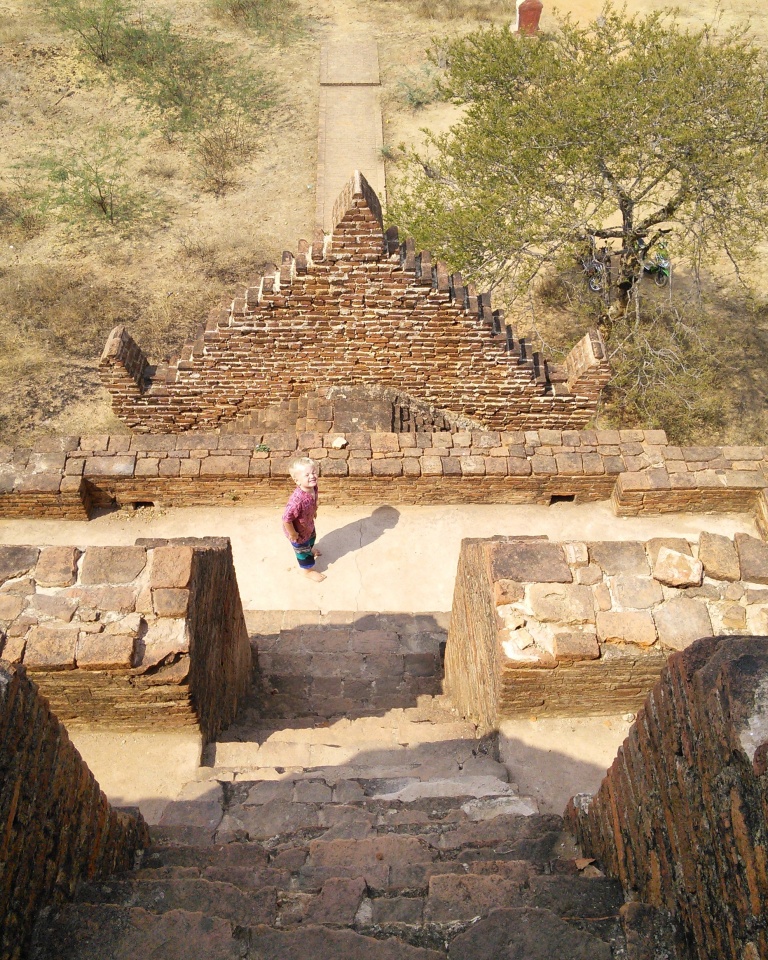 Bagan is also known for its balloon rides at sun rise over the temples but as it was like £300 each it would have been wayyyy too much for the four of us but the views from the ground was very satisfactory.

On the last two days we planned on exploring the site I decided I wanted to drive my own scooter. I was going to get one at the beginning of our stay but I wasn’t feeling confident then but in the end I couldn’t wait to get on one. I’ve never driven a scooter in my life but it wasn’t too difficult. Just gotta balance it, rev it and brake at the right times as well as indicating but I soon got the hang of it. At first I really didn’t want to drive on the sand roads as you can easily skid but we did and it wasn’t too hard. We also raced at full speed on the main roads and I beat TUT and he wasn’t too happy about that😂. 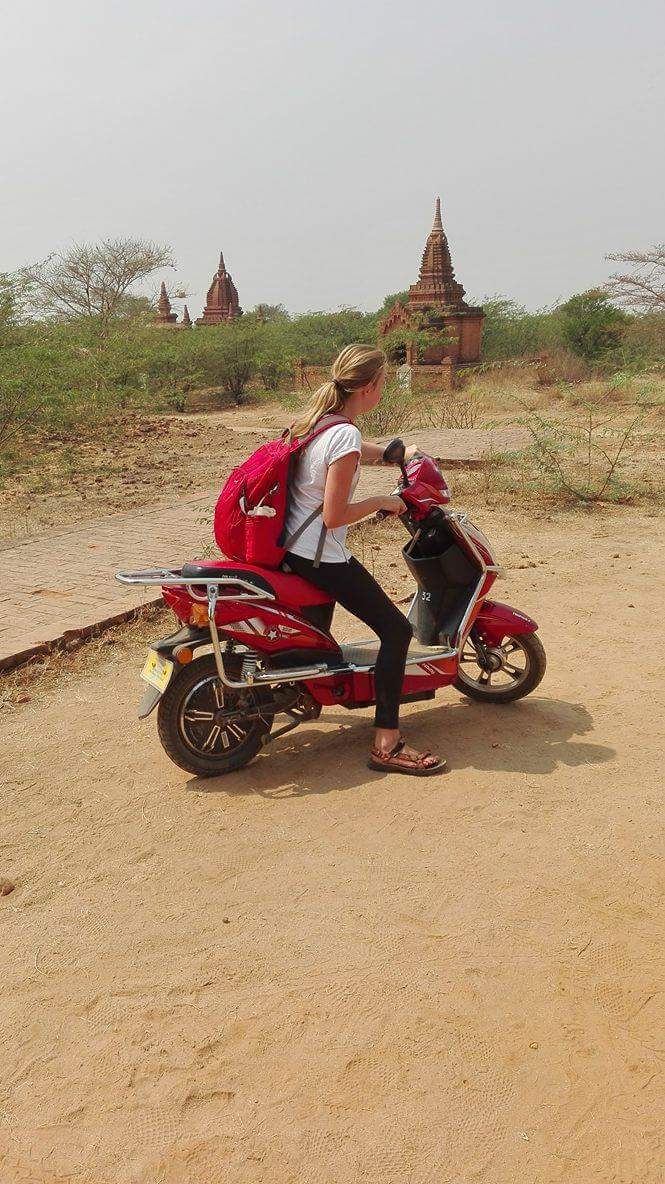 After a couple of days or so we were driving home on a back road coming back from yet another stunning sun set. A crash had taken place and a women was lying on the road with blood in her hair, on her clothes and some was glistening in the burning heat on the road. Soon after a van came and they lifted her onto it. I think she was alive, but barely as she flopped and didn’t react when they lowered her into the truck. I gave them one of our waters to use for her and they seemed very grateful. Its been on my mind since and it just shows things can happen at any time or place. One small yet drastic thing can turn your life upside down even when things look like they are going smoothly. 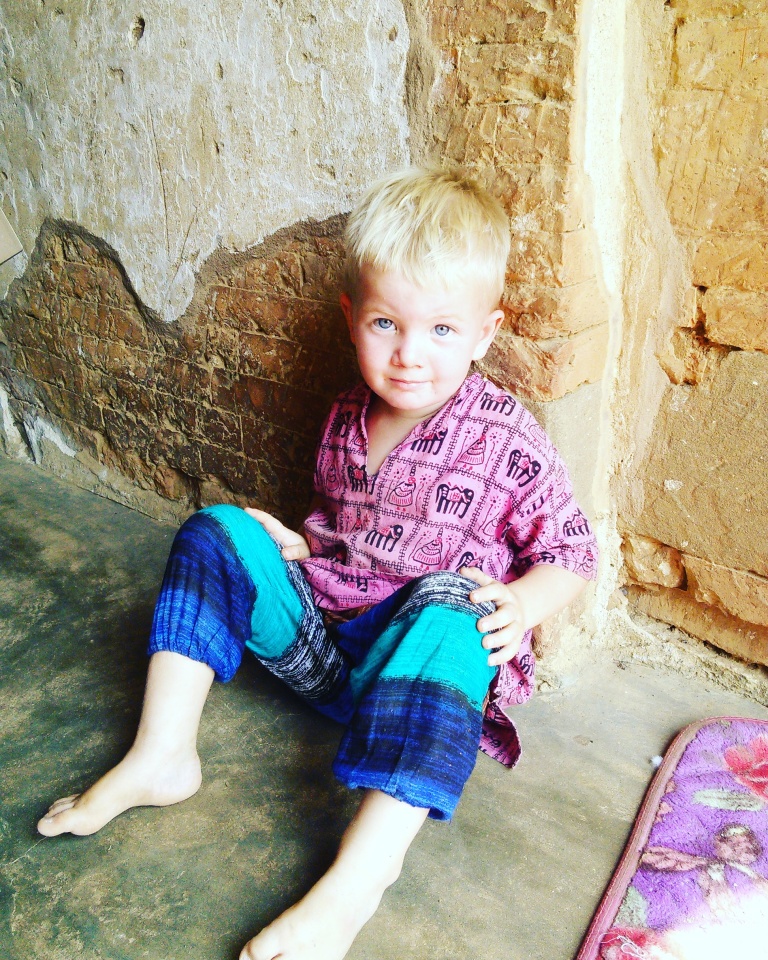 So yes a few ups and downs here in Bagan but mainly good. I WOULD highly recommend it, hopefully I haven’t put any of you off going. It’s beautiful and amazing to see and definitely a highlight of the entire trip.

4 thoughts on “The Beauty and the Beast of Bagan”