After a night in Chiang Khong we took a tuk tuk to the bus station, some websites say it was close but it was a fair way. We arrived at the bus station and a woman was pointing in a direction talking rapidly in Thai to the driver. As she finished he set off at full speed like a maniac. It was only when we were right behind a bus and the driver was waving frantically for the bus to stop did we realise he was chasing the bus down 😂.

It stopped and they helped us pile our bags in the bus. It was a local bus so all the passengers stared at us with interest and the doors were on their last hinges and didn’t shut. We were seated at the back so we felt every bump along the way and near the door so also had the crisp air to deal with.

Monks, women with babies, kids, old ladies with their millions of bags and men with canes jumped on and off along the way whilst we stayed seated until we reached our destination four hours later – Chiang Rai.

After we took a ride to a guest house area and we set off in search of a decent room. It didn’t take long, the room looked as if it hadn’t been used in ages and looked like something based in the 80’s but it didn’t matter for the three nights we stayed there.

The town was by the looks of things a party town where people drank every night in the bars, lady boys roamed the streets and prostitutes were many. So unless this is what you came for the town itself isn’t overly appealing but the sights were worth it all the way.

Unfortunately I was ill starting from yesterday with a really bad fever, headaches, dizziness and other things so my stay in Chiang Rai was spoilt because of that as I stayed in all day but I dragged myself outside to see these exquisite temples which I’m glad I did.

The first main attraction we visited was Wat Rong Khun or simply the White Palace. It was free to enter which was unexpected. It was built by Chalermchai Kositpipat, a local artist from this city and was opened up to the public in 1997. It is an ongoing work of art. 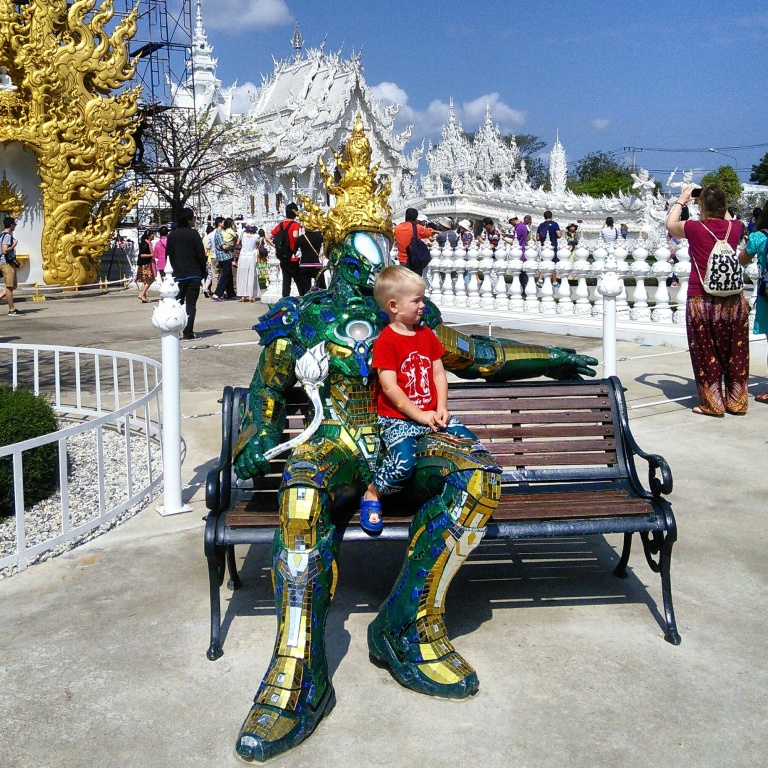 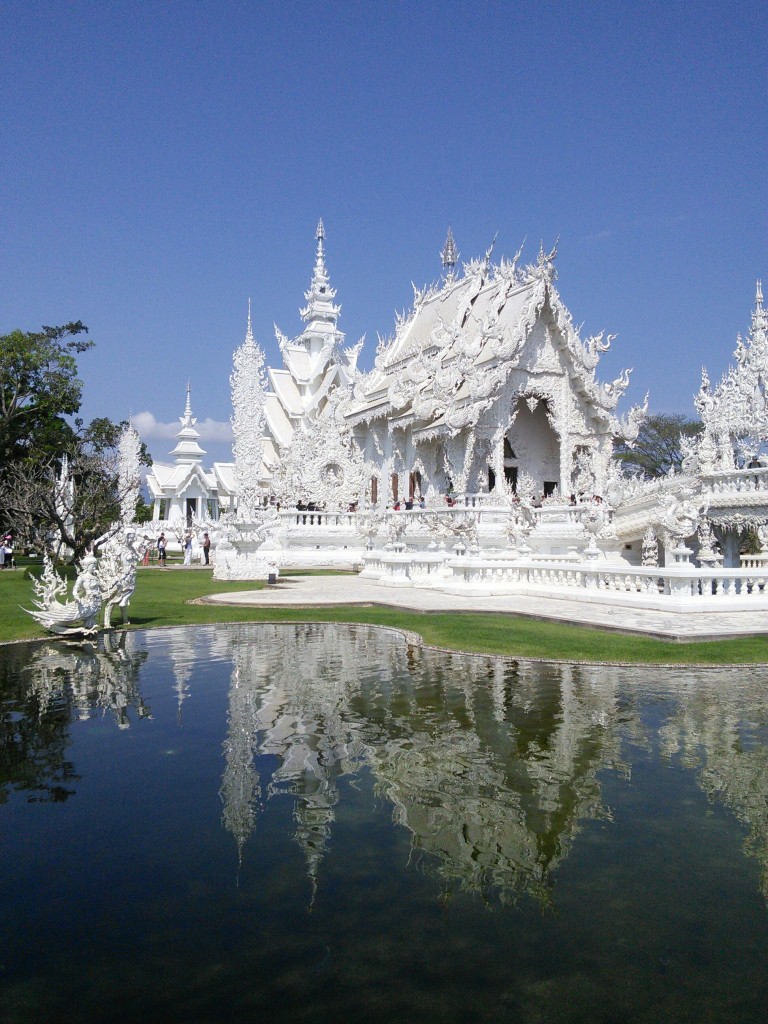 To reach the main building you have to cross a bridge – the bridge of the cycle of rebirth – over a small lake. It’s said that the hundreds of outreaching hands in front of the bridge symbolises unrestrained desire. The bridge shows that the way to happiness is by foregoing temptation, greed, and desire. The building and bridge was obviously, white and seemed to sparkle in the sun light with millions of embedded gem like stones. It was magnificent and well done. The purpose of it all gave it a special effect on your point of view of the building. 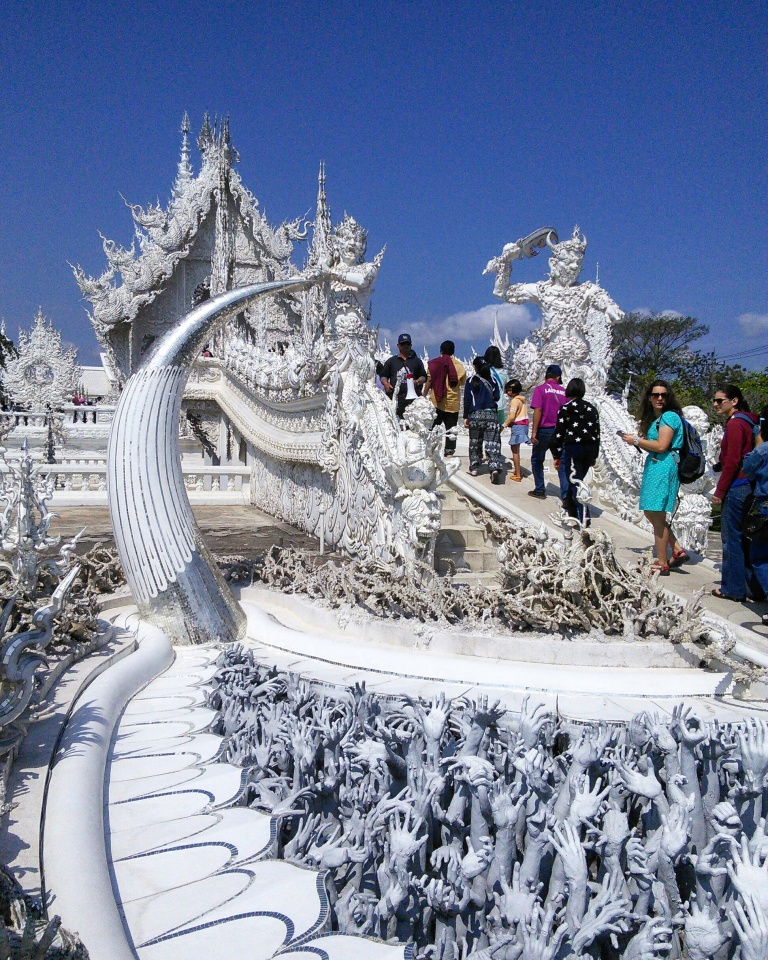 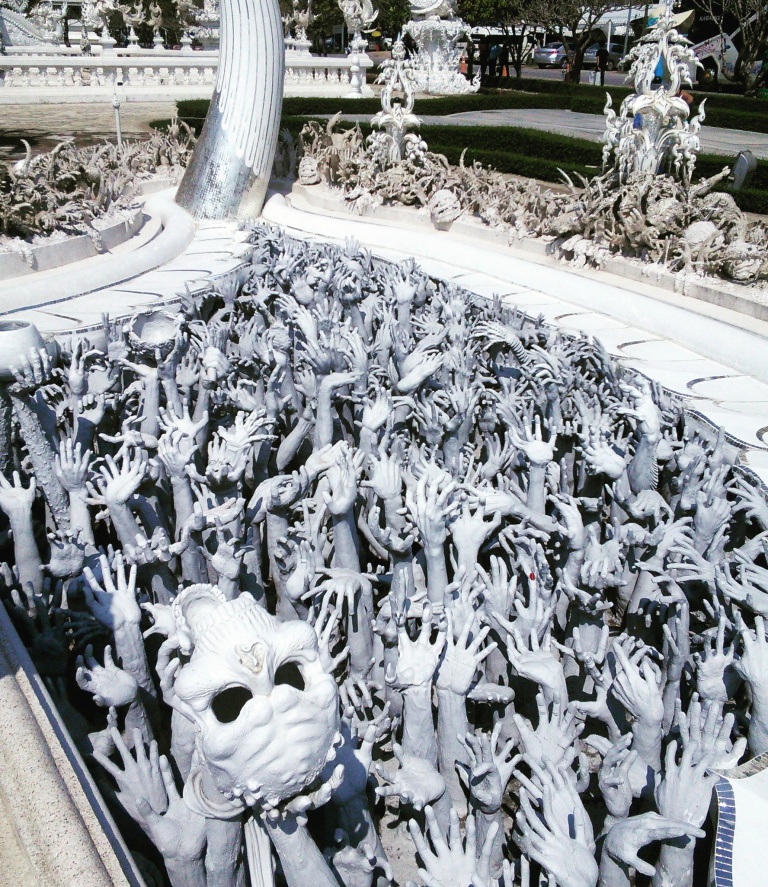 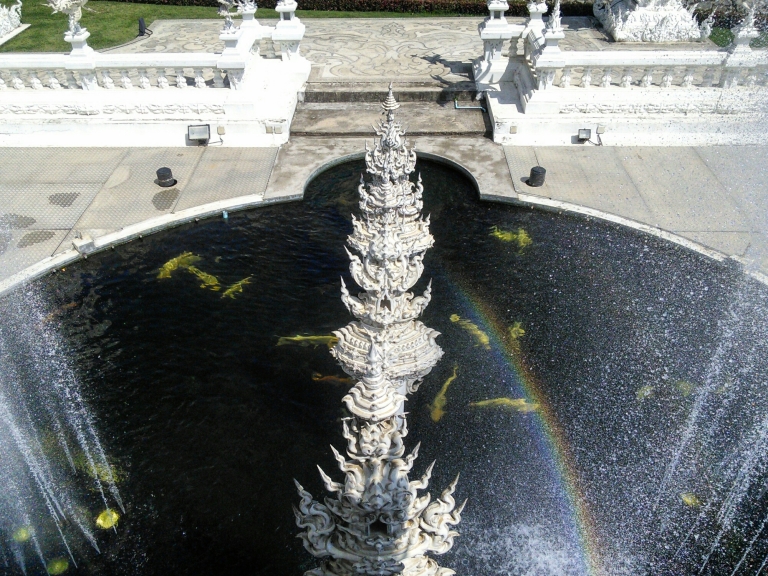 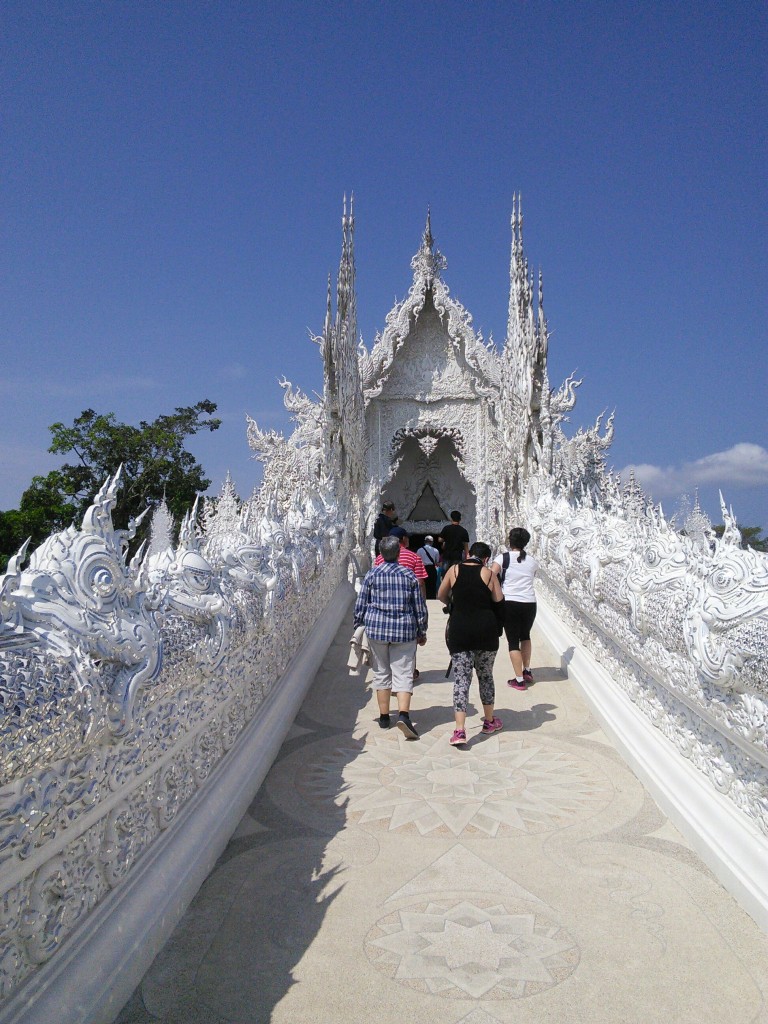 The main building, the ubosot is white with bits of mirrored glass embedded in the building’s exterior which gives it a dazzling affect. The ubosot uses Thai architecture like the three-piece roof and the Naga serpents. Once you step inside the change is piercing. Going from the pristine, heavenly white exterior to the fiery and bewildering warm colours of the interior really has an affect on the whole thing. Murals of orange flames and demon faces are mixed with different Western idols like Michael Jackson or T-800 from the Terminator. Pictures of nuclear warfare and terrorist attacks shows the destructive impact that humans have had on earth. The presence of Harry Potter, Spiderman, Captain Jack Sparrow, confuses the picture but the overall story is clear: people are wicked. On the far wall sits a huge Buddha and the way I looked at it was that Buddha/ God – in whatever form you wish – is significant whilst all the figures from films or wars in the world are insignificant compared to God/Buddha. 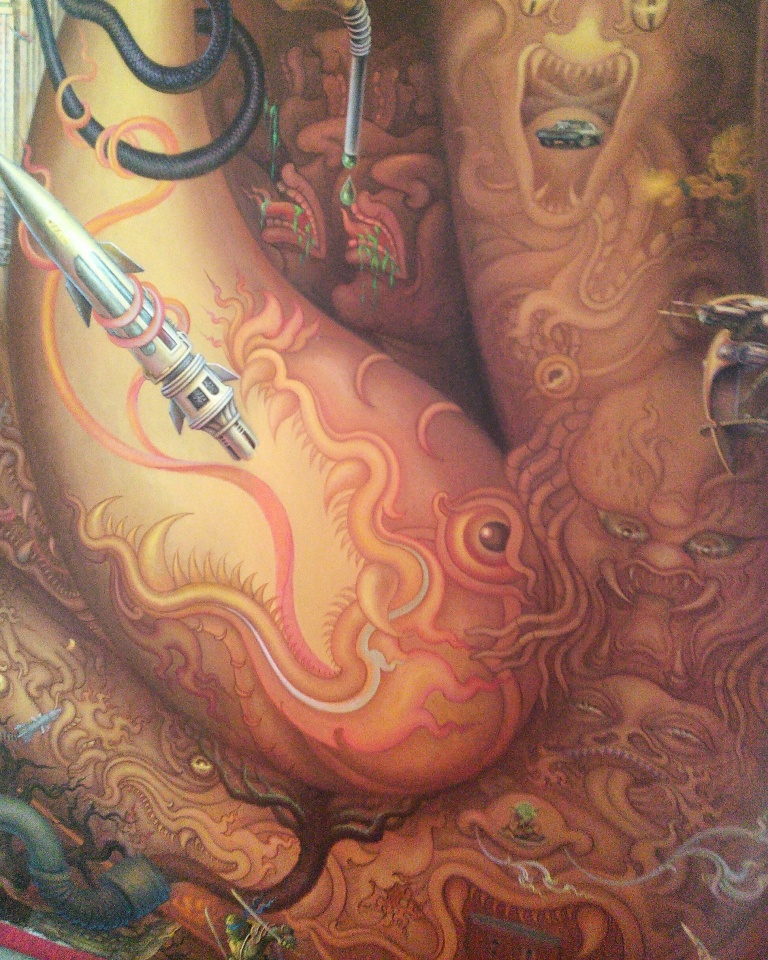 We weren’t allowed to take any photos inside but I took a few. Once I saw Harry Potter on a broom I couldn’t resist not taking pictures.

We walked out of the main temple and realised the complex was bigger than we realised. Many other white and heavenly looking temples scattered around mixed with golden temples but they both equally stood out. Even though it’s a tourist attraction and many people visited I would recommend this so much, its a scene worth your time and memories. 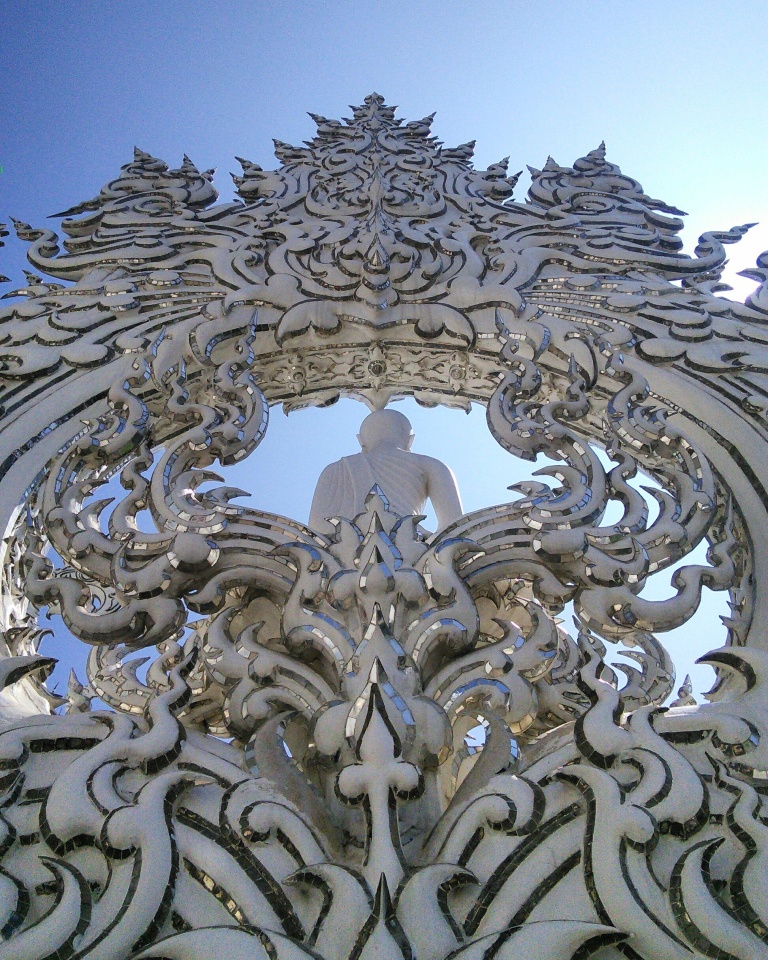 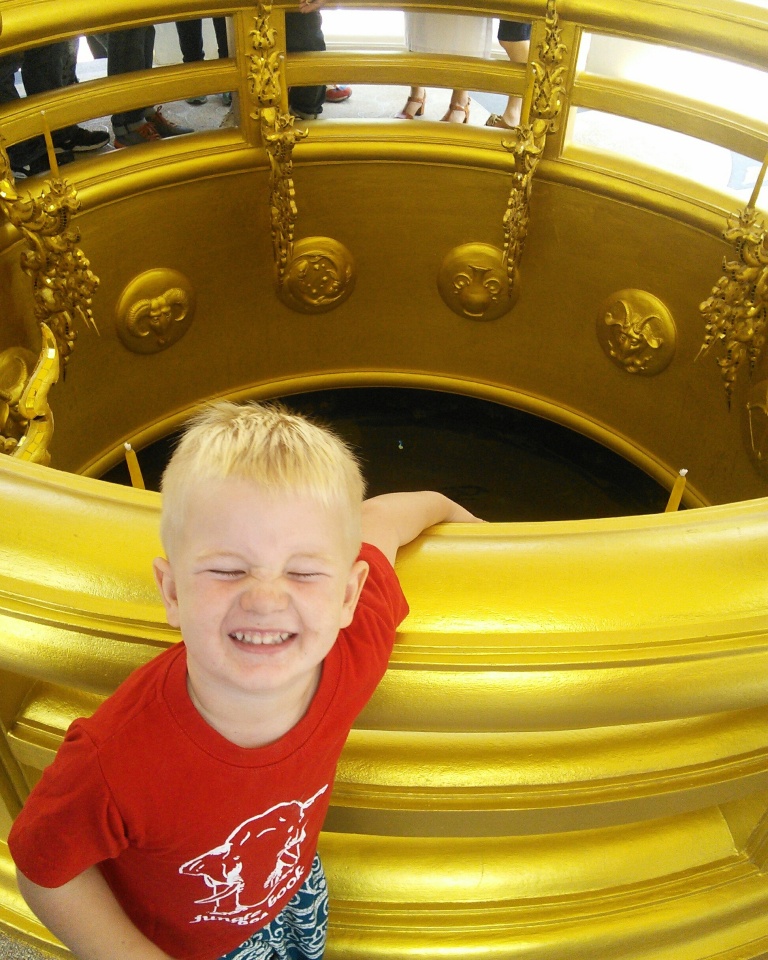 The next temple was Baan Dam or the Black House. This one is also free and is set on a huge piece of property and very unique. Again a local artist designed it and lives here. I don’t think there’s any purpose other than to see, sense and feel the unique architecture. The main building looks like a temple from the outside but more of a posh barn on the inside with its high beams still exposed. 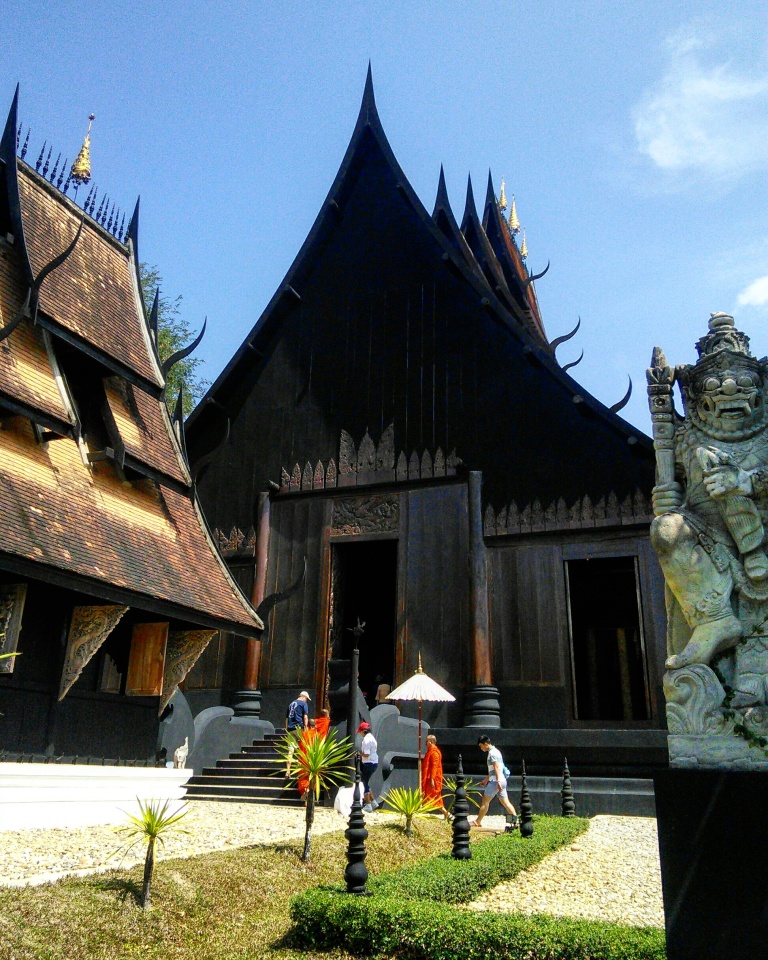 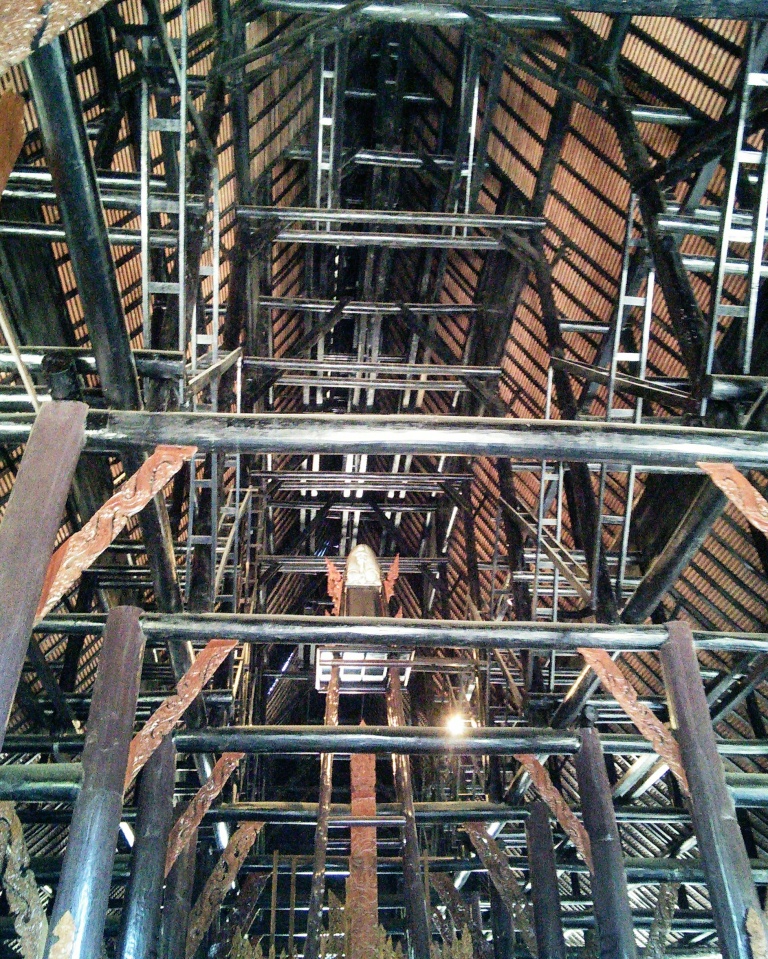 There are many temples and oddly shaped buildings all around the main one. In each are remains of animal parts such as crocodile skin, moose horns, buffalo skins and a few other things. At times your mind could possibly take you back to the Vikings seeing all of the skulls and horns but yet it’s completely different. Not many tourists strolled the paths so it felt like we had it to ourselves, all the furniture was thick, well polished, expensive wood which had a good effect. 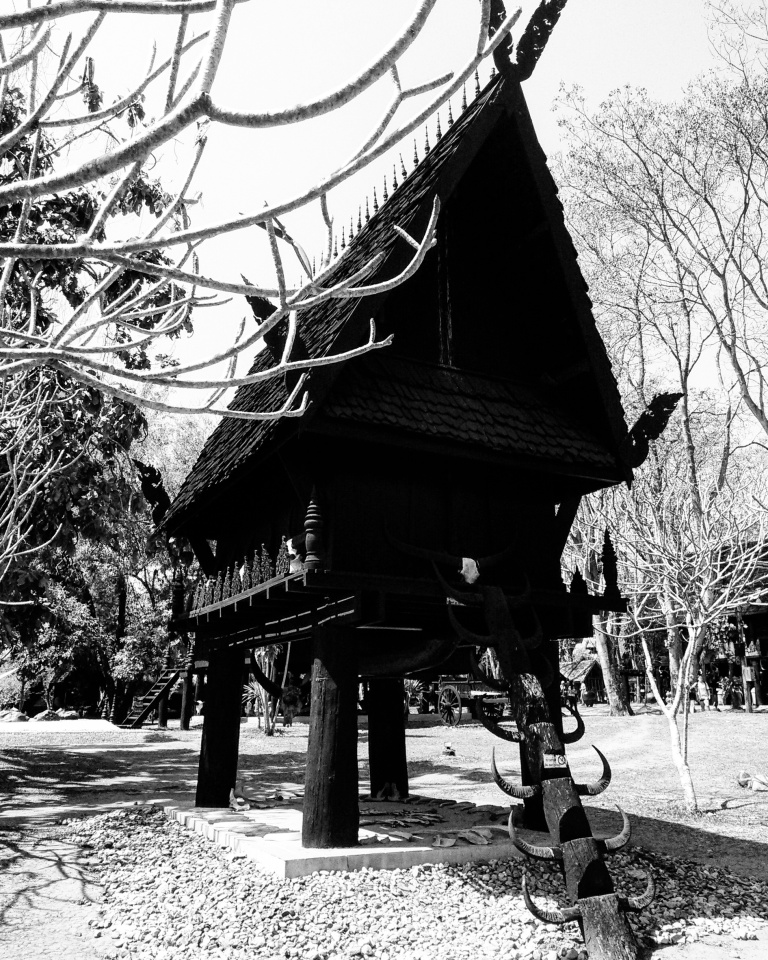 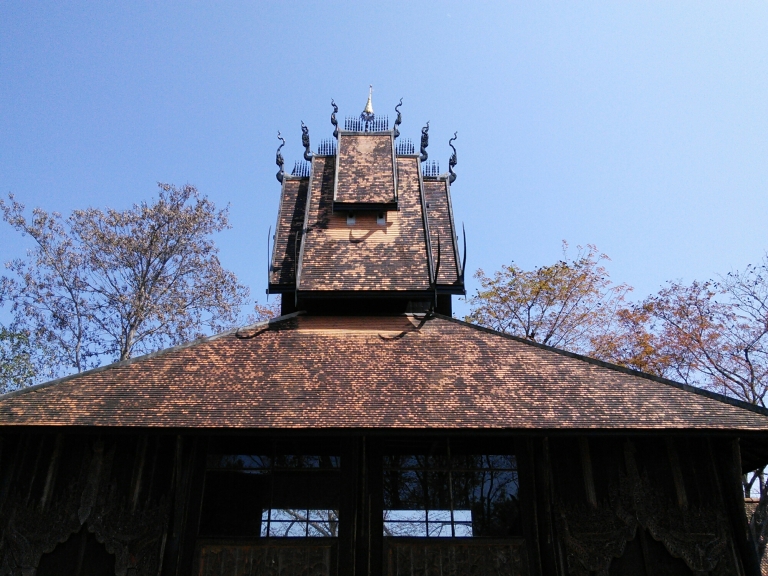 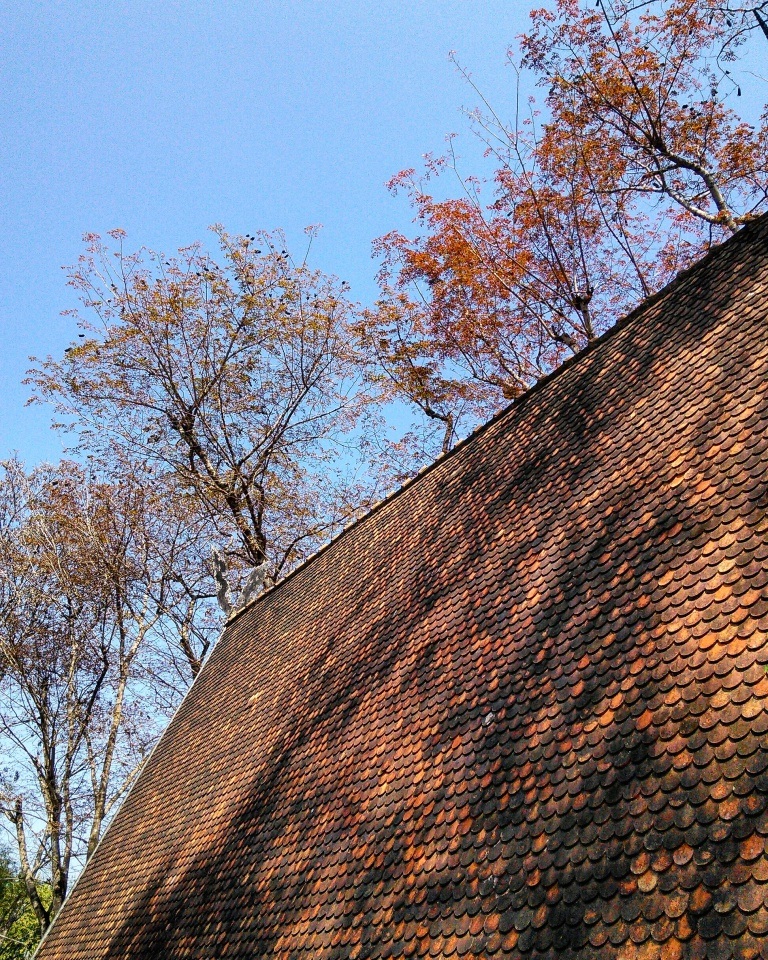 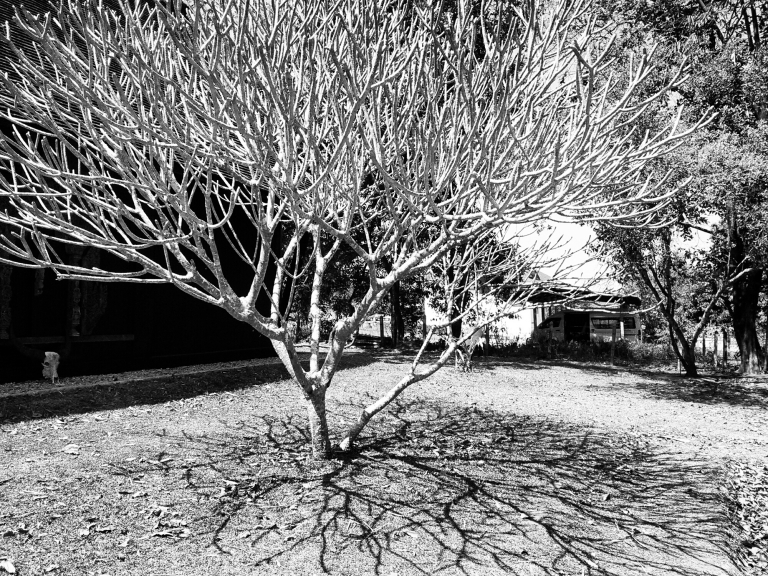 All in all I’m glad we stopped off in this city to catch a glimpse of what it has to offer.

4 thoughts on “Light vs Dark in Chiang Rai”