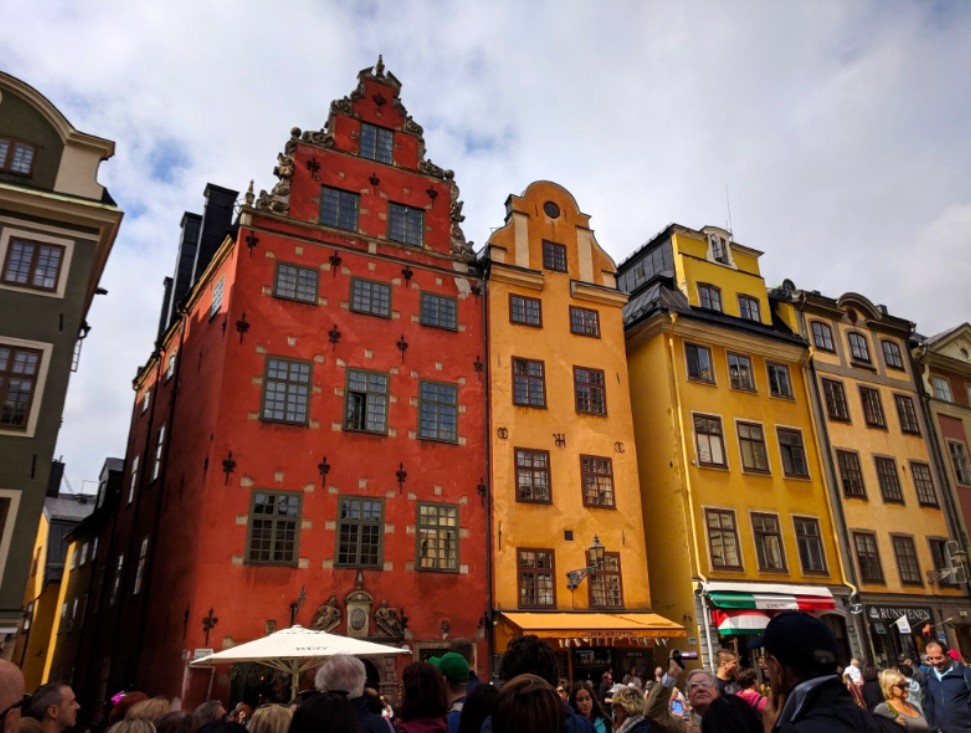 Camping outside of Stockholm, in a beautiful spot called Skarpnäck was a perfect contrast to have when visiting a busy city. Skarpnäck was in the middle of endless forests and by lakes which you could never imagine being anywhere near civilisation; only woodpeckers could be heard along with rustling of leaves amongst the tranquility.

Cycling into Stockholm wasn’t the easiest cycle but it was worth it, like all things, you appreciate a place more after working to see it. After an hours ride we started seeing the first bridges, rivers and colours indicating Stockholm’s centre- Gamla Stan. Unfortunately a lot of work was being done along the roads which inevitably led to chaos but it made it all the more worth it once we had parked up.

Much like Copenhagen the houses spread high in vast sunset colours and cobbled narrow streets stretched in all directions with an extra splash of colour from the overflowing orange stalls.

After admiring the alleys and exploring the old town along with the kings palace and courtyard we retrieved our bikes and set off towards Vasa.

The channels which separated Stockholm into islands and islets added to the authenticity. The waters dazzled underneath the high sun and from each bridge we passed the other parts of the city looked like a jewel of a larger treasure on a lost island. After the crowded old town disappeared from view the tourists finally started to grow thin as we cycled further away from the tourist attractions lit by tourists flashes.

The Vasa is a retired Swedish warship built between 1626 and 1628 and was the largest warship of its time- the ship only sailed about 1,300 metres into it’s maiden voyage before sinking! It is the last remaining ship of the 17th century. The warship took up five floors of the museum in which it is situated and it is truly magnificent. Of course it is completely wooden yet you could just imagine the painted coloured carved statues and icons lining the ship with incredible beauty, sprayed by the waves as it sailed-or at least as it should have.

Cycling out of Stockholm at rush hour was no easy task; perhaps even harder than it is to return home on the tube! Impatient cyclists flooded the streets with no clear organisation and pushed their way through to the front of the queues. However tiring I guess you could say it was exciting too.

Leaving Stockholm we drove North-West to a cheap camping spot in the middle of nowhere called Älvdalen; our longest drive yet . Set in the middle of the forests and by a lake it was perfect. Normally you would be able to use the free wood provided for a fire but after the forest fires that had overtaken most of Sweden only a week before fires were now banned throughout these types of places. 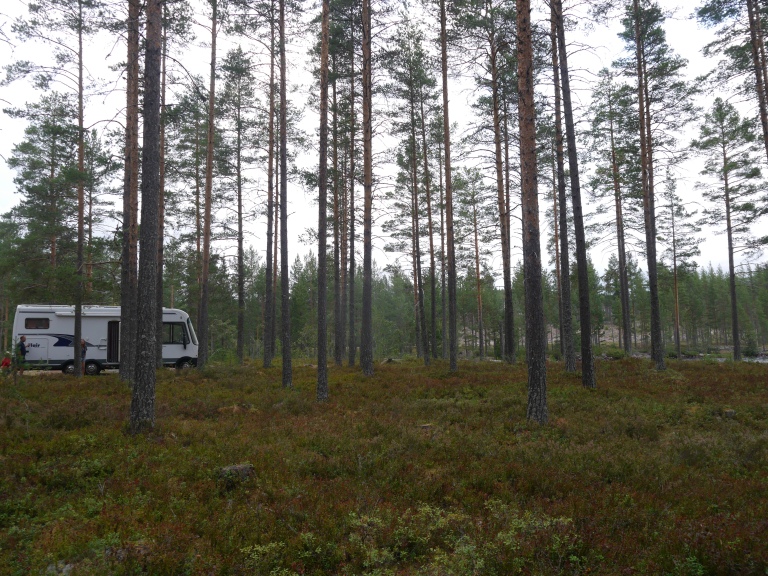 In the same direction as the day before we drove on to Njupeskär waterfall, situated in Fulufjället National park; the waterfall is the highest in Sweden, rising up to 93 metres.

As it seemed in most destinations in Sweden, after rising slowly up the mountain and through rolling forests with not a soul in sight, once arrived it was packed with people-mostly Swedish. The majority had come with full hiking gear ready for difficult terrain yet as usual we simply headed out with a bottle of water. Th hike up to the waterfall is a pleasant one -the easier routes within the national park- especially as you strode within lichen, seeming to glow and set the dark woods alight.

Once at a level with the waterfall the majority of people stayed on the platform to view, however we decided to clamber underneath the striking water, getting soaked without realising. The view from underneath a waterfall always seems to allow a different perspective upon your world, a perspective where one can imagine and feel as if they were the only people on earth, hidden behind undisturbed endless miles of nature.