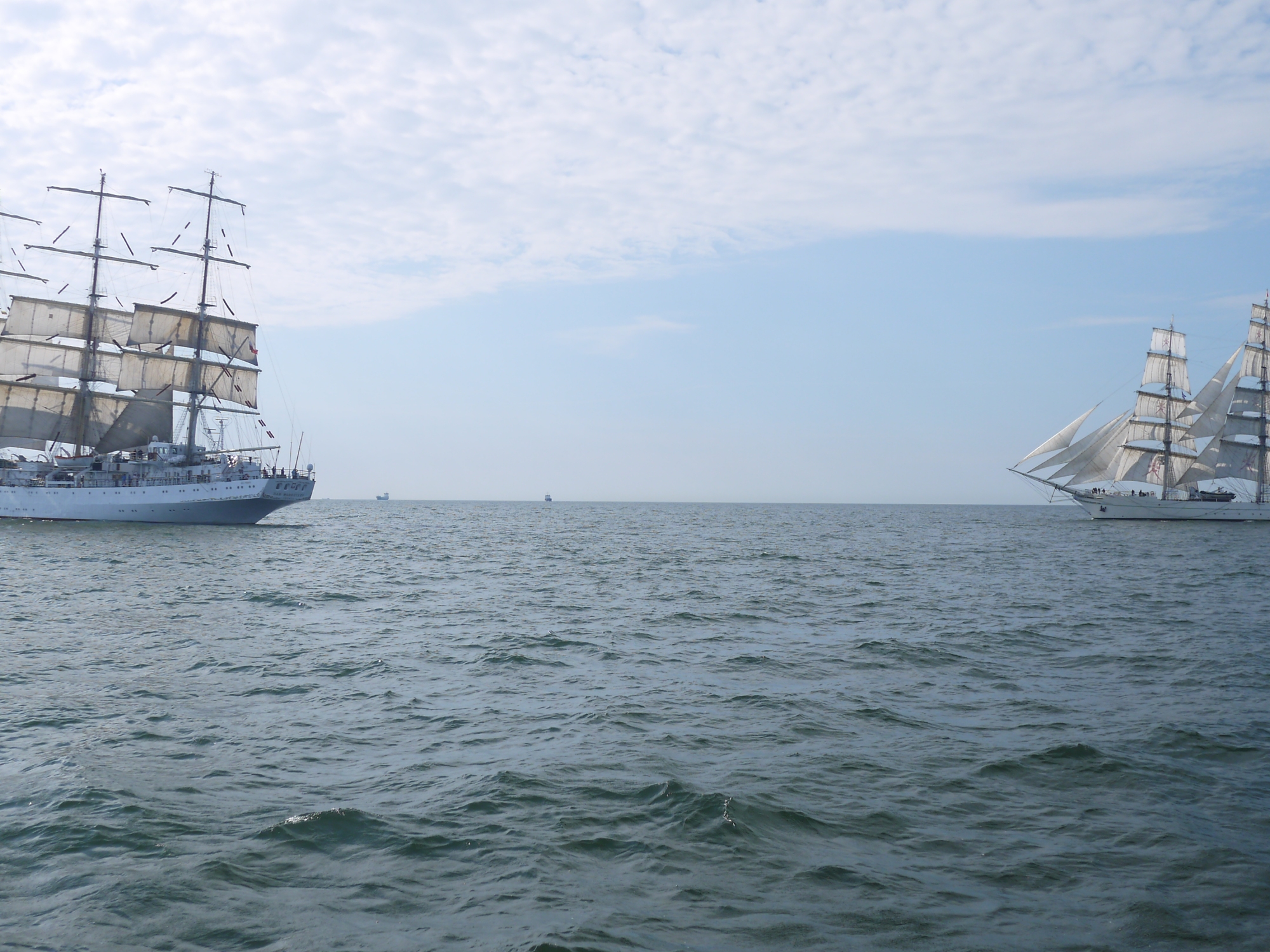 I’m going to be leaving some posts from Tanzania until later so I can write this post as it is more recent. This post is about an experience I had within the sea cadets- to be a part of the Tall ship races 2017!

The Tall Ships’ Races are races for sail training – tall ships which are sailing ships. The races are here to encourage international friendship and training for young people in the art of sailing. The races are held annually in European waters (this year held in the Baltic Sea) and consists of two(in our race there were three) racing legs of several hundred nautical miles. Over 50% of the crew of each ship in the races must have young people onboard.

This year it was held all the way from Scandinavia to Poland. I was part of the last leg of the race which started from Klaipedia in Lithuania and ended in Szczecin, Poland.

I made my way to London and took a flight with 20 other cadets to Lithuania. We didn’t have much time to explore- it was straight into training.

They gave us four hours of training the next day and we soon set off out of the port with all the other ships. Hundreds of people cheered, waved and clapped either side of the Chanel and we responded by doing the same as well as the odd Mexican wave.

A few hours later we were a few miles off shore at the starting point of the race- which had no particular landmark. Dozens of sailing ships were on both sides of us and it felt as if I was watching it from a distance- that it wasn’t actually possible to see a sight like this one.

From that point on for the next three days (was meant to be longer but they put the finish line closer as some wouldn’t make it in time) it was full on.

We were forced to tack every few hours which involved a lot of teamwork and if you didn’t know what to do as an individual it could go terribly wrong.

The winds were very strong to begin with and the ship was tipping so far that water was coming onto the deck – I was scared at this point as it reminded me of the shipwreck in Tanzania (which is my next post) and that was not something I wanted to relive. At night we would be woken to do our duty watch for 2 hours or sometimes to help tacking. The night watches were my favourite (even if I was grumpy) as we got to sit there looking out upon blackness with no sound but the wind and waves under a clear, beautiful night sky. Both sky and water seemed to merge and I felt exposed but in a good, free way.

When my watch -after port- was on watch in daytime one day I decided to steer. It’s quite easy, all you have to do is listen to instructions and examine the binnacle (which supports the compass). But it so happened at the time I was steering we went head in to a heavy storm. As I watched the black clouds approach, rain came rushing in sideways like mini pebbles. The rain obscured my vision and the glass covering the compass but I was forced to hold on and try to keep on course with the high winds making it a struggle. Someone had put sunglasses on me half way through and when we were finally out we were rewarded with a double rainbow.

On the day before we entered port in Poland we anchored up so that we could finally have a shower. The Channel going into Szczecin was a few hours worth of sailing and in that time we dressed up as our chosen superhero (mine being cat woman) and did games.

Once in the city we were able to go out and explore. The city itself was beautiful although I think the ships from the race helped on that side of it. There were many crowds, food stalls, rides and attractions to keep us entertained.

One morning we went to one of the islands which was a beach set with volleyball and such.

That same evening we all went to a crew party which had all the officers and crew from all the other ships. We were able to access free food, fireworks,

conversations with all other crew members and of course the dance floor on which we danced till past midnight. It was a memorable evening and brought us all that little bit closer together as a team.

The next and final day we explored the underground bunkers of the city which were built in 1941 as refuge in the war. It was very interesting although not a good feeling and unfortunately I wasn’t allowed to take any pictures.

In the afternoon we attended a crew parade which started from beside the river all through Szczecin.

Up until that point I hadn’t realised how large the city was. We shook hands, waved and posed for the cameras as well as singing all through the city (some lost their voices).

The parade ended past the president of the citys residence at the award ceremony. It was a big stage and even bigger seating for all the different crews in the ships which attended the race.

We all sat there on edge until our position was declared.

We left with 3 trophies; 1st in our class, 1st overall and 1st in our series!

Because of this we were visited by the president of the city as well as interviewed for the local news. We celebrated well that night- our crew made history for our ship, TS Royalist and it will never be forgotten. 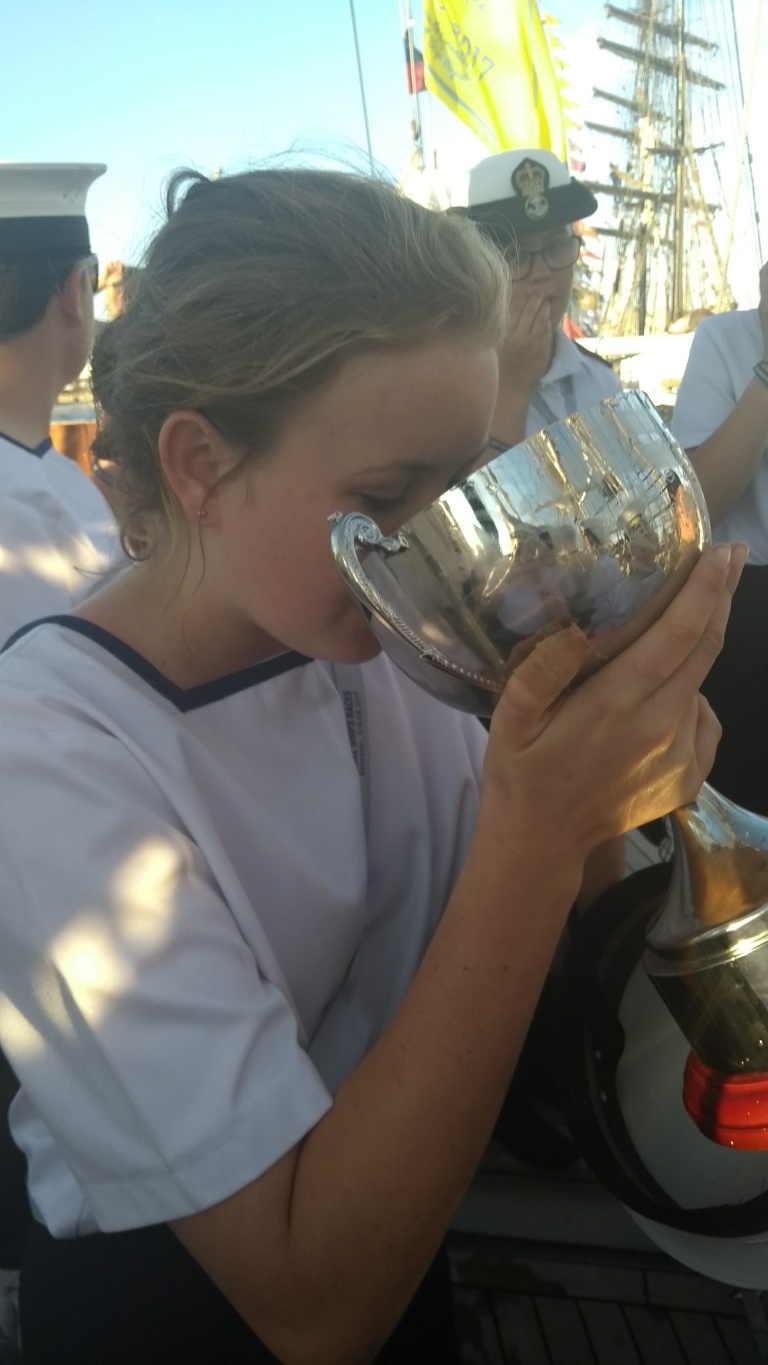